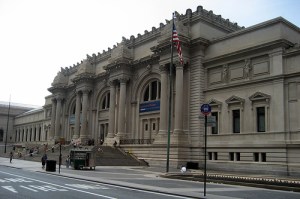 The Metropolitan Museum of Art announced today that, as of Monday, July 1, it will now be open seven days a week. But that’s not at all! It also announced the change would include its beloved uptown museum, the Cloisters, at the northern tip of Manhattan. The only days that the museum will now be closed are Thanksgiving Day, Dec. 25 and Jan. 1.

The move had been expected for some time, and comes just a few months after the Museum of Modern Art announced it would go to a through-the-week schedule. That change will go into effect in May.

The Met’s director, Thomas Campbell, had this to say in a press statement:

Art is a 7-day-a-week passion, and we want the Met to be accessible whenever visitors have the urge to experience this great museum…Last year we had record-breaking attendance of 6.28 million visitors and yet were turning away many thousands more on Mondays, when we have traditionally been closed.

The Met also announced it will change its opening time from 9:30 a.m. to 10:00 a.m. So those early-morning visits to the museum are now a little less early.