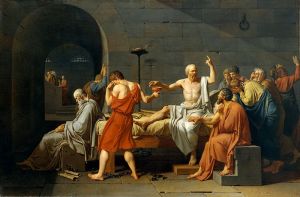 Here’s an interview of with Larisa Leventon, a former portfolio manager at SAC Capital Advisors, about her new website Dot Dash 3. [Bloomberg]

The Met buys as Jacques-Louis David for $840, because it was thought to be a copy but after the Met bought it they said it wasn’t. [The Art Newspaper]

“The Bronx Museum of the Arts has received a gift which will ensure free admission for the next three years.” [Art in America]

The Indianapolis Museum of Art’s director, Charles Venable, lays off 11 percent of his staff, tweets about his birthday lunch. [MAN]

Paola Antonelli, senior curator in MoMA’s department of architecture and design, writes about the relationship between critics and curators. [Nieman Reports]

A 19-year-old woman has been arrested in connection with the theft of modern paintings from a Rotterdam museum last fall. [Reuters]

Renaissance Painting sold in Nazi era is returned to the heirs of a Jewish art dealer. [Bloomberg]