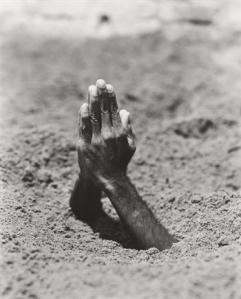 Tilda Swinton is reprising a performance piece she first did at London’s Serpentine Gallery in 1995, sleeping in a box at MoMA. [TAW]

Sotheby’s went ahead with an auction of pre-Columbia art over objections from four Latin American governments that the pieces had been illegally exported. The house has said it closely examined the works’ provenance. [ArtsBeat]

The AP finds a bunch of tourists who are outraged that they had to pay $25 to enter the Metropolitan Museum of Art. “We are confident that the courts will see through this insupportable nuisance lawsuit,” said a museum spokesman. [AP]

Jake and Dinos Chapman did not like being assistants to Gilbert and George. [The Guardian]

Boston’s Museum of Fine Arts curates a great-sounding show about Japan that will travel Japan and never come to Boston. [The Boston Globe, via MAN]

Creative Time Chief Curator Nato Thompson on social-practice art: “Say what you will, this stuff is happening, and you might want to put your head in the sand and say, ‘I wish it was 40 years ago and it was different and art was more straightforward,’ but it’s not.” [NYT]

Russian tycoon Boris A. Berezovsky sold a Picasso and a Warhol in a last-ditch effort to raise funds before his death last week. [NYT]