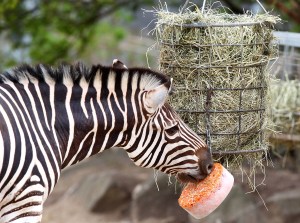 A zebra eating a block of frozen carrots. (Getty Images)

Elysia Borowy-Reeder has been named director of the Museum of Contemporary Art Detroit. The position had been vacant since November 2011. [Detroit Free Press]

Sebastian Smee on a George Stubbs painting of a zebra at the Yale Center for British Art. [The Boston Globe]