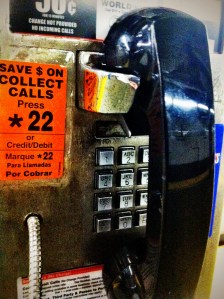 It’s apparently going to start raining or snowing at any moment in New York, if it hasn’t already. So, move quickly, find your nearest pay phone, and ring 1-855-FOR-1993 (that’s 1-855-367-1993). You’ll be greeted by a recording of someone telling a story about living in the neighborhood you’re calling from in 1993. The campaign, titled “Recalling 1993,” is part of the New Museum’s “NYC 1993” exhibition, and apparently works from any of the roughly 5,000 public telephones in Manhattan.

We just tried to call from our landline and got a very polite gentleman telling us to call back from a pay phone. (He was working as a city tour guide 20 years back, he said.)

The New Museum has a map to help you locate your local pay phones, as well as a few sample recordings. In one, former club kid James St. James talks about living in an apartment that was once home to a murderer who cooked his girlfriend and fed her to homeless people in Tompkins Square Park. In another, store owner Dave Ortiz talks about the intense smell that the Meatpacking District used to have, and recalls the days when rats were as big as cats.