It only took filmmaker Jim Strouse three months in New York City to fall in love. He moved here from Indiana straight out of college, and for years after, he and his girlfriend had the perfect arty bohemian relationship. They made films together, they made kids together—it was all happening.

But then suddenly it wasn’t. Sometime around the birth of their second child, the relationship started to fray. They went to couples therapy, but then came the infidelity and the screaming matches and the second apartment.

When it came time to call it quits, there was only one problem: how could they get divorced when they had never gotten married in the first place?

“It’s really complicated,” said Mr. Strouse, 36. “We never got lawyers involved. It got close many times, but it was weird, it was strange. We were just winging it from day to day with the kids.”

Marriage rates in the United States are at record lows. And when more than half of children born to women under the age of 30 have unwed parents, according to Child Trends, a nonpartisan research center on children and youth issues, more and more couples are finding themselves in such relationship limbo. As Richard Fry wrote in an article on the Pew Research Center website, “Marriage increasingly is being replaced by cohabitation, single-person households and other adult living arrangements.” And with kids in the picture, breaking up has become that much messier.

Whereas married couples go through the Supreme Court to have their unions formally dissolved, unmarried couples are forced to navigate the nebulous world of child custody, alimony and asset negotiation on their own. Or worse, in Family Court.

“I understand the value of marriage, because the commitment is on paper and there’s a legal process to getting out of it,” said Mr. Strouse, whose own breakup dragged on for years. “When you’re not married, it’s really … There was no process to go through.”

In some ways it makes sense that the current generation of baby-makers has become wary of the big M. Many grew up in broken homes as divorce rates climbed over 50 percent in the late 1970s and 1980s, according to census data. No one wants to relive the bitter divorce that his or her parents endured.

But here’s the fallacy: keeping your union unofficial in the eyes of the state doesn’t make your relationship immune. In fact, according to research from the University of Michigan, unmarried couples with children are far more likely to split than their married counterparts: 66 percent of cohabiting couples separate by the time their child is 10 years old, versus 28 percent of married couples.

“Getting married is kind of like closing the door in some ways,” said Mr. Strouse. “When you’re not married, the door is always open, and that was confusing. Even when we had a terrible fight, it always felt like I could just leave now and it doesn’t matter, because we never got married. The lack of legal, formal commitment did not help.”

Mr. Strouse paused before continuing: “It’s helpful to get married, if you want to get divorced.”

Ariel Boles is a 37-year-old freelance lighting designer who says he never wanted to tie the knot. When Mr. Boles and his girlfriend fell in love, and when she got pregnant, nine months after they first met at a friend’s party, the topic of formalizing their love via marriage never even came up.

“I come from divorced parents,” he explained. “My mom has been married three times and my dad is gay, so I just don’t come from marriage, from a family of marriage, where it’s an institution that’s been around, much less venerated.”

Eighteen months after the birth of their child, the couple split up. Only then did Mr. Boles start viewing the institution in a different light. “After going through this whole thing, I actually now think marriage would help, like taking that extra step is empowering for some reason,” he said. “For me, at this point, I think it would encourage me to work it out and stay together.”

As it is, both Mr. Boles and his ex have unpredictable work schedules, and even now, more than four years later, they have not come up with a concrete custody calendar. And as can be the case for many splitting parents, Mr. Boles admits, “There’s an alimony situation.”

The couple tried to work things out through conversations, but there were rough patches. During one such patch, Mr. Boles’s former partner got a lawyer, who went through his financial information and helped steer them toward an agreement, which Mr. Boles said is “not, like, written in paper” but entails a shared bank account. 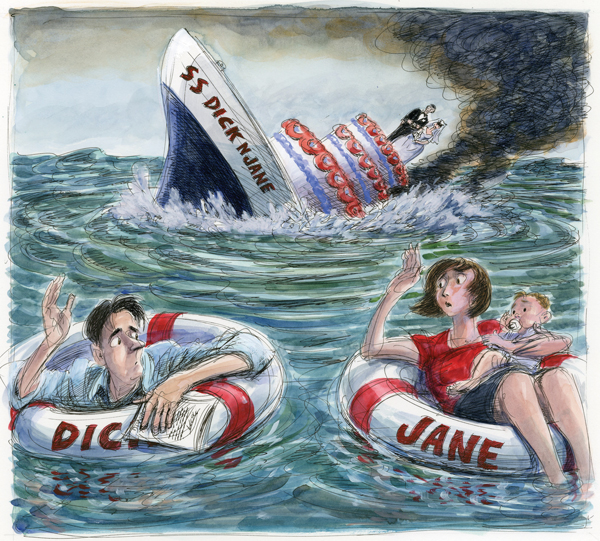