“I guess I felt—and now feel—as though I was 19 when I wrote it,” Renata Adler said of her first novel Speedboat. “And maybe still am. And by Pitch Dark, I was maybe 19-and-a-half.”

In fact, Ms. Adler, a slight, bespectacled woman who was seated across from me a few weeks ago at a café near Grand Central, was turning 38 when Speedboat was published in 1976. Pitch Dark came out seven years later. Both, long out of print, have just been reissued by NYRB Classics, but not before other writers drummed up interest about Ms. Adler’s work. The National Book Critics Circle campaigned for Speedboat to be reissued, and David Shields, whose 2010 book Reality Hunger helped introduce a new generation of readers to Ms. Adler’s debut, wrote in an email to me, “A crucial part of the performance of her literary persona—in Speedboat and Pitch Dark and elsewhere—is how resolutely un-nice she is while remaining deeply civilized.”

In person, she’s friendly, occasionally pausing mid-thought, hooking her left thumb into the black belt of her blue jeans while she chooses her next words. On the page, she is calm, observant and logical; she is funny, with an eye for the ridiculous; she is rigorous and intelligent. And she is unabashedly honest.

It is hard to reckon her real-life generosity with her famously contrarian nonfiction, or even with Speedboat’s deadpan prose. Here is Ms. Adler—or rather, Ms. Adler’s very Adler-like narrator, a reporter named Jen Fain who lives in New York and works for a tabloid, the Standard Evening Sun:

All the men in the room had drinks in both hands. They had tried to extricate themselves from conversations by saying, “I guess I’ll have another drink. May I get one for you?” The trouble with this method is that it takes people right back where they came from; it is impossible to approach with one lady’s gin and tonic another lady who may be drinking Scotch. Escape procedures, however, were in full force. Some people, in a frenzy of antipathy and boredom, were drinking themselves into extreme approximations of longing to be together. Exchanging phone numbers, demanding to have lunch, proposing to share an apartment—the escalations of fellowship had the air of a terminal auction, a fierce adult version of slapjack, a bill-payer loan from a finance company, an attempt to buy with one grand convivial debt, to be paid in future, an exit from each other’s company at that instant.

Ms. Adler is—to tweak a line she used in a notoriously negative review of Pauline Kael’s criticism—page by page, line by line, and without interruption, brilliant. Few writers articulate as deftly the position of the clever, skeptical, frequently isolated outsider. She also has an impressive pedigree: graduate of Bryn Mawr, the Sorbonne and Harvard; recipient of a Guggenheim Fellowship; winner of the O. Henry prize. Member of the special staff of the House Judiciary Committee from January to August 1974; staff writer at The New Yorker; New York Times movie critic from 1968 to 1969. And it’s not as though her novels, Speedboat and Pitch Dark, in which another Adler-like narrator, Kate Ennis, attempts to resolve her affair with a married man, didn’t have powerful allies. Ms. Adler’s original editor on Pitch Dark was Robert Gottlieb, then the editor in chief of Knopf. (Both novels were later licensed in paperback to HarperCollins.) Her agent was and remains the formidable Lynn Nesbit, who helped launch the careers of John Cheever, Joan Didion and Hunter S. Thompson. So why did she disappear?

“Frankly, in the ’90s, as publishing became ever more corporate, a lot of books went out of print,” said Edwin Frank, editorial director of the New York Review Books, who republished the novels at the end of March. “It is absolutely true that if you’re a novelist in America, you are to a large degree dependent on bringing out new books regularly to get ongoing attention for your old books.”

Ms. Adler followed Pitch Dark with Reckless Disregard, a nonfiction dissection of two libel cases, in 1986. In 1987, an essay collection called Politics was pulled at the last minute, after it had already made it into bound galleys. She wouldn’t publish another book for more than a decade.

The book she finally did release, in 1999, was Gone: The Last Days of The New Yorker. Ms. Adler already had something of a reputation as a polemicist. In the introduction to her collection of movie criticism, 1969’s A Year in the Dark, she writes of a full-page ad taken out in the Times attacking her reviews. Her 8,000-word takedown of her old colleague Pauline Kael, published in the New York Review of Books in 1980, now reads as less of an assault and more of a boisterous and prescient examination of the perils of being a staff critic (or blogger). Ms. Adler writes, “By far the most common tendency, however, is to stay put and simply to inflate, to pretend that each day’s text is after all a crisis—the most, first, best, worst, finest, meanest, deepest, etc.—to take on, since we are dealing in superlatives, one of the first, most unmistakable marks of the hack.”

Gone—which begins, “As I write this, The New Yorker is dead”—occasioned a furious backlash in the journalistic community. A flurry of articles followed—in the Times especially, but also in this paper. (Mr. Gottlieb, whose tenure as editor in chief of The New Yorker was portrayed rather unflatteringly, wrote a response claiming that “her book reflects a dangerous arrogance.”)

Her essay collection, Canaries in the Mineshaft, was released in 2001, but since then, aside from a few articles (one, in The New Republic, on the Bush v. Gore Supreme Court case, was republished as a pamphlet by Melville House) and an interview here and there (as with Robert Birnbaum for the website The Morning News), Ms. Adler has published very little.

Her relationship with book editors, she implied, has not always been easy. (One exception she specifically mentioned is Michael Denneny, who published Canaries in the Mineshaft at St. Martin’s Press.) “If you’re a prizefighter—which one is not—the guy in your corner should say heartening, encouraging things whether he means them or not.”

“This is really too much gossip,” she added, halting this line of thinking.

Despite her reputation (“Renata Adler is being disagreeable again,” begins an essay from August 2000 by Slate’s Judith Shulevitz), the critical judgments she makes often seem less disparaging than simply true. She has high standards. “Twice, at publications other than The New Yorker,” she writes in Gone, “I actually thought of going to the printer, armed with a rifle perhaps, and lying down, rather as political demonstrators used to do, and saying, They shall not print, in my name, this version of a piece.” (That was, she admitted, “a bit of hyperbole.”)

She maintains a level tone, only getting truly exercised by faulty arguments, the flaws of which she coolly lays out.

If her nonfiction is compelling for its certainty, it is a carefully cultivated air of uncertainty that has driven her fiction. In Speedboat and Pitch Dark, the facts are still there, still arranged deliberately, but it’s no longer clear where they lead.

Take this passage, from Speedboat, which sums up the struggle against calcified bits of received language: “‘Take off everything except your slip,’ the nurse said. ‘Doctor will be with you in a moment.’ Nobody under forty-five, in twenty years, had worn a slip, but nurses invariably gave this instruction. There they all are, however, the great dead men with their injunctions. Make it new. Only connect.” At the end of the novel, when Jen reveals she is pregnant with her boyfriend’s child and can’t figure out how to tell him, the scene in the nurse’s office takes on a new cast.

The appeal of her own fiction happens on an emotional level. “I guess there’s a desperation in Pitch Dark,” she agreed. The book is partly about an affair gone wrong, but the threat of violence that seems to lurk beneath the surface hints at something darker. Ms. Adler writes: “Is it always the same story, then? Somebody loves and somebody doesn’t, or loves less, or loves someone else.”

Ms. Adler ran through the advice she might give her book’s hero if the character were a friend—Has she considered playing hard to get with her married lover? Has she considered getting pregnant?—before reiterating: “That character doesn’t want to keep playing out that too-familiar game.” 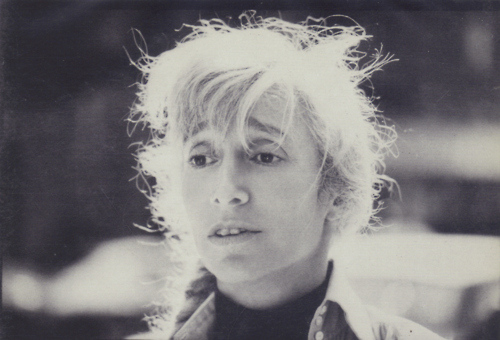