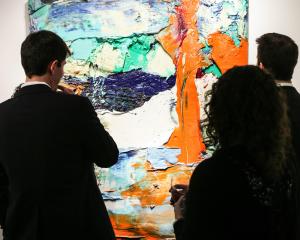 On Tuesday night, the long week of art fairs in New York in conjunction with the Armory Show kicked off with the opening gala for the Art Dealers Association of America’s Art Show at the Park Avenue Armory on the Upper East Side. The fair is celebrating its 25th anniversary this year. The Art Show is like the laid back, slightly better-dressed, cool older brother of the Armory Show, a place where collectors take their time, guests make repeated visits and dealers feel free to take a few chances, curating small mini-retrospectives in their booths. The art world arrived one by one in big black Mercedes sedans and SUVs with tinted windows. They came to spend money, to size each other up and probably some of them came for the free dumplings, being steamed by hand by the bar (those people probably took the subway).

Tim Blum, of LA’s Blum & Poe gallery, was giving the Beijing artist Zhu Jinshi, who is 63 and a founding member of the Star Group with Ai Weiwei, his first solo show in New York. (The gallery had given the artist his first solo show in North America last June.) They were averaged-sized canvases that had literal piles of paint scooped onto them like mud. You could smell them in the booth.

“This falls in the category of looking at things that have been overlooked,” Mr. Blum said. “Back in the 70s, doing abstract painting in China was almost like being homosexual in England in the 1860s.” He described Mr. Zhu’s painting process as “like shoveling shit,” real manual labor. The smaller works were for sale for $100,000 and the larger ones for $165,000.

“This isn’t the kind of fair where people are banging down the door,” he said, though he’d already sold a couple pieces. “It’s almost antithetical to the other big fairs. It’s a good place to introduce people to something.”

Over half of the booths were devoted to small solo shows. Metro Pictures was showing new work by Louise Lawler, photographs of  Degas’s famous ballerina. By the end of the night they had sold out, solely to institutions, though the gallery wouldn’t say which ones. The artist Jannis Kounellis had essentially closed off Cheim and Read’s booth with a big block of a sculpture called All or Nothing at All. It was for sale for $500,000 (“that’s modest,” said Adam Sheffer, of the gallery) and under consideration by an “American institution.” David Zwirner, who was showing intriguing Milton Avery paintings from the 1930s (they looked almost like they could have belonged to the folk artist Bill Traylor), said the purpose of these solo booths was as much for everybody’s sanity as anything else.

“Nowadays, there are three New York fairs,” he said. “The Art Show, the Armory and Frieze,” which is coming up right around the corner in May. “The only way to do this intelligently is to do one-person shows.” (At the Armory, Mr. Zwirner has a very different booth devoted to the video artist Diana Thater.)

Pace Gallery was an early champion of the art fair solo show, having shown only a single artist at each of the Art Shows for the past 14 years. Marc Glimcher, the proprietor of Pace, was leaning against the wall of his gallery’s booth, which was painted light blue and had a series of small Kiki Smith sculptures of birds and wolves that looked like they were leaping through an azure sky. Mr. Glimcher had his head buried in his phone, the screen of which was lighting up his face basically the same color as the booth. When asked if he was free for an interview, he said, “Well, everything’s sold, so why not?” He backtracked to say nearly everything. Pace makes a point of not doing the Armory Show and I asked him why the gallery continues coming back here.

“First of all,” he said, “Everyone is a member of the Art Dealers Association,” a slight pause for emphasis, “of America. So that’s a thing. And just look at it. You don’t do this art fair and then hate yourself afterward. Every art fair is a long line of people who have a problem with you and you don’t remember their names. Here, you can buy some art and then go have a good time.”

On that note, a group of acquaintances began slowly encircling him in pleasantries and it was time to hit the bar. The thing about the Art Show is that the main thread of conversation is as much about the little squares of macaroni and cheese canapés and the separate table devoted to just smoked salmon as it is about the art in the room. In the crowd, I overheard at least one exchange about the death of Hugo Chavez (art fairs and current events are about as disparate oil and water), heard a publicist, when asked what he was doing at the fair, say with a short sigh “schmoozing” and listened to about a dozen simultaneous discussions involving the phrase “We really have to catch up.”

This being the Upper East Side, there was a lot of talk of money as well. Lehmann Maupin had work by Mary Corse for sale for between $100,000 and $135,000, paintings that had a kind of barely-there minimalist sheen.

“So you want to know what sold, to whom, and how much,” David Maupin said to me. “I’ve been thinking of starting to ask collectors permission to give their names to reporters, but then I always forget. Well, we sold three—”

“Two and a half,” whispered an assistant, cutting in.

“Two and a half.” They were still finalizing the last one.

One of the night’s big surprises at a fair where many dealers chose to show obscure or rarely-seen artists was the booth of the dealer Christoph Van de Weghe, a towering man with silver hair and a blue suit, who was presenting work by Damien Hirst, who is only about a year out of his global spot painting extravaganza at every Gagosian gallery in the world and a Tate retrospective.

“I think Damien Hirst is the most important artist since, what, 1990?” he said. “So of the last 25 years. I know the market is very down on him, but if you look at the value of paintings—like this spin painting,” he threw an arm over to the large circular canvas with a splattering swirl of paint covering it, “the price is $650,000.” He raised his eyebrows, as if to say, “See?” “Damien is going to be around in 50 years.”

As for why Mr. Van de Weghe chose to do this fair instead of all the other ones this week, he said, “Listen, it’s 6:30. It’s incredible how many collectors I’ve seen in the last hour.”

It was a sentiment echoed by Per Skarstedt, showing work by George Condo and others in a booth nearby.

“It’s not a great time for an interview right now,” he said. “I have a lot of clients here. We have to pay the rent. Come back tomorrow.”