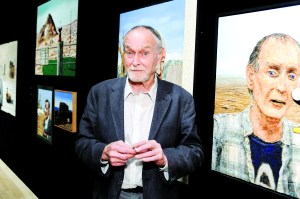 Llyn Foulkes at his 2013 Hammer opening. (Photo by Stefanie Keenan)

At Documenta 13 last summer, the rotunda of the Museum Fridericianum in Kassel, Germany, served as the nexus for the town-sized show, a tightly curated “brain” that featured Giorgio Morandi still lifes hung near actual bottles from Mr. Morandi’s studio and Man Ray’s Object to be Destroyed, a metronome embellished with a photograph of Lee Miller’s eye. Lodged somewhere in the Documenta skull, then, was new work from Los Angeles-based artist Llyn Foulkes, whose art showed in a dark upper hall in the Fridericianum. His retrospective at L.A.’s the Hammer Museum comes to New York’s New Museum on June 12.

At Documenta there was The Awakening (1994–2012), a tableau of a naked, elderly couple who look like figures from Munch, in a lonely bedroom that could have been painted by Hopper. Nearby The Lost Frontier (1997-2005) showed a Los Angeles that looked like a garbage dump, patrolled by a guard with a Mickey Mouse head. Though they look like paintings, both were sculptural in nature, mixed-media pieces that project some 8 inches from the wall, which is part of why they take so long to produce. They were lit in a way that produced actual, deep shadows within the works.

The Machine, a drum set-like assemblage of cymbals, horns and cowbells, sat between those two works, and for the first three weeks of Documenta Mr. Foulkes, 78, would play it several times a day. A base string near his foot lent a jazzy feel to the songs he’d written, like “A Smoggy Day in Old L.A.,” which is old-school and talky, in the mode of Tom Waits. There is one about Mickey Mouse that includes the verse, “He’s not even a real mouse / he’s that rat that lives in your house.”

“Maybe it’s just the times now,” Mr. Foulkes said of his newfound popularity in a phone interview from Los Angeles. It’s certainly nothing he’s sought. “My work is very much about myself and how I feel about things. There’s a lot of narrative in it, and I think a lot of young people have been discovering what I was doing way back and they saw they had to catch up with me.”

Mr. Foulkes’ work was included in Paul Schimmel’s famous 1992 exhibition “Helter Skelter” at the Los Angeles Museum of Contemporary Art, but it has only just now begun to receive widespread attention following his appearance at Documenta and the 2011 Venice Biennale. His body of work is eclectic—part of the reason he’s been off-radar—and it doesn’t come quickly. He shuns studio assistants. “I have a feeling that a lot of people use so many assistants that it takes away the whole process,” he said, “so you don’t ever discover new things.”

The New Museum show will be pared to 100 works from the 140 at the Hammer, but every aspect of Mr. Foulkes’s work will be represented, from his early drawings and eerie postcard paintings to his rock paintings, his bloody head series and his work with Mickey Mouse.

Ali Subotnick, who curated the Hammer show, said she’d wanted to do a show of Mr. Foulkes’s work since 2007, when she visited his studio to see if she wanted to include him in an upcoming group show at the museum. She ended up staying for four hours, and was part of the reason Mr. Foulkes appeared in the two international shows. When Carolyn Christov-Bakargiev of Documenta and Bice Curiger of the Venice Biennale came to town and asked for recommendations, she sent them straight to Mr. Foulkes’ studio.

Ms. Subotnick was particularly drawn to the way “he wears his heart on his sleeve,” she said. “I think most people are used to art that’s cool, high-concept and distant. For him it’s totally about his perspective.”

Llyn Foulkes emerged from the Army in 1956, not terribly eager to listen to anyone else’s ideas or join any artistic cliques. He studied at the University of Washington and then the Chouinard Art Institute in Los Angeles, but dropped out. For money, he drove taxis and worked in a Thomas Kinkade-like picture factory. He wasn’t the type to hang around after openings.

“I’ve just never been interested in hanging out with artists,” he said. “Like the whole thing where they go the cafe and they all start talking about art, I never had any desire to do that.”

He liked Rauschenberg and Johns, though, and wanted to make their collages in a way that was relevant to Los Angeles, so he began making portraits of rock piles, inspired by Chatsworth, where they shot the old cowboy movies.

The rocks became popular with collectors, but, for Mr. Foulkes, they started to feel hollow, so he moved on to portraits of people with bloody holes in their heads. Anything might creep out of the holes: memories, in the form of window shutters or a letter, money. In 1976, the New York Times praised this series’ “ghoulish wit.” “The frame may even portend an act of aggression against us,” John Russell wrote of a self-portrait, in which Mr. Foulkes appears to be creeping off the wall.

His Disney obsession began after his former father-in-law, who worked at Disney, gave him an internal company pamphlet from 1934 describing how the Mickey Mouse Club indoctrinates its members. Mickey started showing up in Mr. Foulkes’s paintings, freshly killed, or tormenting him. Mr. Foulkes isn’t anti-Hollywood (he says his hero is Charlie Chaplin, and Brad Pitt owns The Awakening), but he still feels the same way about Disney, thinks it actively seeks to reshape the brains of America’s children to devious ends with shows like Hannah Montana. “My God,” he said, “if you look at the Disney Channel now, they’re teaching children to be rock stars.”

Mr. Foulkes has played music throughout his career, sometimes writing lyrics on the back of his works. In the 1960s he played in a band called City Lights that would hit the same places as the Doors, like Whiskey A-Go-Go. Back then, he noticed that music was growing ever louder. He thinks that trend may be on the wane, though, and was heartened by Justin Timberlake’s relatively subdued performance at the 2013 Grammys. (That Mr. Timberlake is a former Mouseketeer may have escaped his notice.)

If part of the reason he’s gained attention is because his work borders on installation and performance, two genres currently valued by younger artists and curators, he said he hopes they’ll glean from his New Museum show the idea that painting isn’t dead. He also hopes to show them that you can have success without playing the game.

He was ambivalent about coming to New York. “My feeling has always been that New York is about New York,” he said. If you’re not New York, not here all the time and a part of the scene, you have no hope of earning reviews or attention. And he could never be anything but Los Angeles.

If the museum can raise the money, The Machine may join him out East, though, and that seemed to spark something in him. “If I do play out there,” he said, “I’ll play ‘Give My Regards to Broadway.’”