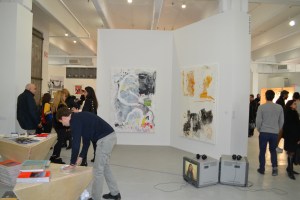 It’s the first day of Independent, the four-year-old Chelsea art fair conceived by Elizabeth Dee and Darren Flook, and a steady stream of stiletto heels (along with some more practical footwear) are ascending and descending the treacherously steep staircases of 548 W. 22nd Street. Spread across three floors, the fair was buzzing less than an hour after it opened.

Jayne Drost Johnson, director of Elizabeth Dee and co-director of Independent, said that as the fair develops, dealers are exhibiting increasingly ambitious projects that would be impractical—or impossible—to show at other expositions. Referring to an enormous Guillaume Leblon sculpture on the second story, Ms. Johnson said, “you would never be able to just put it in a traditional art fair.” The piece, which consists of disembodied legs hanging by the toes from a ladder on a massive platform, is perhaps the biggest piece, but others presented unique installation challenges. Broadway 1602, for instance, displayed a piece involving oil continuously dripping from a lightbulb.

The bright, open space, designed once again by architect Christian Wassmann, is studded with sets of three walls arranged in Y configurations (last year all the walls were oriented such that they pointed to true North). Wassmann “thinks like an artist as much as an architect,” said Ms. Johnson.

Though the fair had barely begun, Ms. Johnson reported already having made sales for Elizabeth Dee, the highest of which was in the $20,000 range. Among other things, the gallery is showing new video works by Ghent-based collective Leo Gabin, some of which are composed of “found YouTube footage” (a Leo Gabin show opened at Elizabeth Dee on Tuesday.) Viewers stopped to don headphones and watch teenage girls sing Taylor Swift songs as they passed the TV sets on the floor, before moving on to take in the rest of Independent’s many offerings.