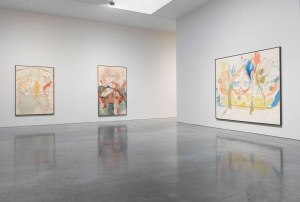 More than two dozen canvases from the 1950s, the decade that made Helen Frankenthaler the iconic Color Field pioneer, have been gathered on 21st Street. It’s the first such show in New York since 1960. Most of them are stain paintings, alternately brilliant and facile, titanic and slightly nauseous. Some, like 1953’s Open Wall, a landscape-format metaphysical unfolding of the concept of division in blues and browns, are cool and philosophical, while others, like Trojan Gates or Holocaust, both 1955, are hot and anxious. All of them are—not because of the chromatic effect of garish colors clanging like bells and then fading into unsized, off-white canvas, but because of their compositional organization—like flowers: the elements always grow from the center, even if you can’t quite tell exactly where that center is. But the show’s real jewels come from before the explosion: 1950’s Painted on 21st Street, borrowed from the Smithsonian, and three 1951 canvases, The Jugglers, The Sightseers and one untitled, all borrowed from Ms. Frankenthaler’s estate.

Painted on 21st Street is a primordial desertscape rendered in oil paint, sand, plaster and coffee grounds. A tumult of whisks and whooshes form a singular but unnameable shape with the mystical unity of a windstorm. It’s like seeing the face of God in a column of smoke. If you were to divide it, however, you might see, to the left, Don Quixote mounted on a lion with ram’s horns, holding onto a black, turquoise and sand-colored pommel, and on the right, a cluster of overlapping grapes carved out of plaster adjoining a dried-blood splotch partially enclosed by an ear-shaped ocher line beneath a sandy dark chair speckled with coffee. None of it makes sense, but some strange alchemy enlists even the spontaneous dabs of ocher and turquoise, or the tentative little black marks, into the same overriding purpose—unless the alchemy is operating in the other direction, and it’s spontaneity itself that is the effect.

In The Jugglers, this tidal energy is turned 90 degrees and confined to the picture plane. Patches of orange, blue, white, green and yellow are divided by and wash over thick black lines, with red and green sometimes forming experimental extensions of their own. Every section postpones resolution to the next in an infinitely vibrating circuit; every shape or border says, “yes, but,” or “yes, and also.” Only by the fact that no part is complete is the whole made irreducible. It’s like an argument for the necessity of human imperfection. In the untitled canvas, the same rough shapes and debris remain on the surface, but the color falls back into blue sky and desert sand—and then, after that, the deluge. (Through April 13, 2013)