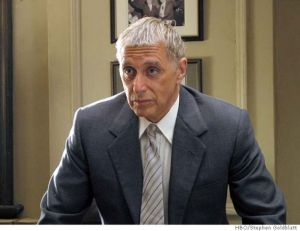 Al Pacino as Roy Cohn in “Angels in America.”

Portions of the archive of Roy Cohn, Joseph McCarthy’s chief counsel and the main character in Tony Kushner’s Angels in America, will hit the block at Swann Auction Galleries on April 16.

Some of the objects for sale include his ID badge from the McCarthy hearings, a cigarette box gifted to him by McCarthy and “an assortment of hate mail directed at Cohn,” according to a press release, and at least one letter of support, from Cohn’s friend Barbara Walters.

Cohn died from AIDS-related complications in 1986, shortly after losing his license to practice law.