As Vishaan Chakrabarti, a principal at SHoP Architects, was unveiling the Southside Williamsburg master plan they designed for Two Trees, he evoked the image of Manhattan’s skyline. “Just like in the dead center of New York,” he told the assembled group of reporters, “we have this parabolic moment—there’s this moment of exuberance that happens” as the towers rise on the waterfront, culminating in the towers at the Domino site. The tallest will reach 598 feet, or about 60 stories, making it taller than any other building in the borough.

“And that,” he continued, “that’s the stuff of postcards all around the world.”

But despite the best efforts of SHoP and Two Trees, the plan does not succeed in aping the natural parabolic shape of an organic thicket of towers found in midtown, downtown or even downtown Brooklyn. Nor could it—Williamsburg’s new planning regime, instituted in the 2005 rezoning and reinforced in 2009, makes sure of that.

Traditional downtowns grow around transit hubs, and are built by myriad different developers and architects, all working in competition. Through thoughtful zoning and market forces, the tallest towers sprout at the center of the transit network, with heights tapering off as you travel farther away.

But the new Williamsburg and Greenpoint skylines are more Bal Harbour than Brooklyn.

The towers form a narrow stockade on the shores of northern Brooklyn, a sort of Potemkin village of development to be admired from Manhattan. But behind them—nothing.

A block or two away from the old Domino refinery, the skyline plummets to near zero—most sites across the street are zoned exclusively for industrial use, and cannot be developed beyond one and two stories. There is no gradual downward gradient. “There’s no way to hide that,” admitted Mr. Chakrabarti of the disparity in heights.

It’s not hard to see how it ended up this way. The rezonings took the path of least resistance between the pro-development wishes of the Bloomberg administration on the one hand, and the anti-growth attitudes of vast inland neighborhoods of Williamsburg and Greenpoint on the other.

Manufacturing districts, where there weren’t existing residents to bother, were upzoned. Development in established residential neighborhoods, on the other hand, was restricted.

The result is an awkward hybrid that pleases nobody. There isn’t enough supply allowed to meet demand and temper the wave of gentrification shooting over northern Brooklyn, but what supply is allowed comes in the form of towers so out of place that they spark resentment throughout the community.

When the existing neighborhoods of New York were built before World War II, it was during a time when increases in demand were met by gradual but widespread redevelopment. Two- and three-story townhouses were replaced by six-story tenements, and when demand reached a fever pitch, as in Manhattan and a number of neighborhoods in brownstone Brooklyn, these were in turn redeveloped into grand apartment houses and skyscrapers. The redevelopment thinned as you got farther from the city center and subway stations, the result being the “parabolic moment” that Mr. Chakrabarti spoke of at the Domino unveiling—the true “stuff of postcards.”

But today, the zoning code does not afford the opportunity for such organic development in the neighborhoods of northern Brooklyn.

With high-rises on the waterfront and row homes farther inland, the planning lacks provision for mid-rise buildings. Six stories or more, the traditional New York mid-rise smooths out the transitions between towers and townhouses, marrying the density needed to meet demand with a human scale that doesn’t cast shadows for blocks.

But the standard new law tenement, a design that developers were eagerly building in the early 20th century in Southside Williamsburg, is now twice as dense as what’s allowed in vast swaths of Northside, Greenpoint, East Williamsburg and Bushwick.

The word that leaps to mind is “capricious.” Why are Manhattan-style high-rises acceptable west of Kent Avenue, while landowners across the street are not allowed to build so much as a single-family home, their land instead reserved for low-value industrial use?

And from a transit point of view, the planning makes little more sense. High-density building is allowed more than half a mile from the Bedford Avenue L, on the waterfront, but no housing is allowed at all on the blocks immediately adjacent to the Morgan Avenue stop. And it’s the pre-war neighborhoods, which sprouted naturally closest to the L, where residential development was most restricted in the rezonings.

The development on the Brooklyn waterfront may look nice from Manhattan, but it’s hard to see what it’s given its home borough.

From a pro-development perspective, the amount of supply allowed is clearly insufficient to meet demand, evidenced by a near-tripling of housing costs in Williamsburg since 2004 and the wave of gentrification racing across Bushwick. Rents there recently jumped a stunning 17 percent in just 30 days, according to real estate brokerage MNS.

And far from allowing enough supply to bring down prices, the towers on the waterfront may have backfired. Despite being insufficient to bring down prices, the outsized heights on the river have helped foster the widespread impression of an overdeveloped Williamsburg. Anti-development sentiment has flared across northern Brooklyn, out of proportion to the relatively paltry number of new units.

Far from being a model for the rest of northern Brooklyn, the Williamsburg rezonings are seen as a cautionary tale.

“We don’t need the speculation that Bushwick is the next Williamsburg,” Councilwoman Diana Reyna told The Wall Street Journal in October, angling for a rezoning that would limit development in Bushwick to low-rise structures. (Though given the pace of things, it might be more realistic to talk about preventing Broadway Junction and East New York from becoming the next Williamsburg.) Even Mayor Bloomberg doesn’t dare rezone the manufacturing districts of East Williamsburg.

The location of the new development also raises concern. Newly built market-rate apartments in Brooklyn these days are almost never affordable, but some are less unaffordable than others. There is new construction in Bushwick, for example, that was overbuilt during the boom and is now within reach of upper-middle-class strivers. The waterfront, on the other hand, where most of the new housing is allowed, is reserved for the unabashedly wealthy.

None of this is the fault of SHoP or Two Trees, who, unlike some waterfront developers, had no role in the rezoning. But it’s hard to see their piece of the waterfront as emerging any more organically. Even if Jed Walentas’ waterfront towers are built to a higher quality than the Northside Piers—and there’s every indication they will be—they are unlikely to be resented any less by the community. 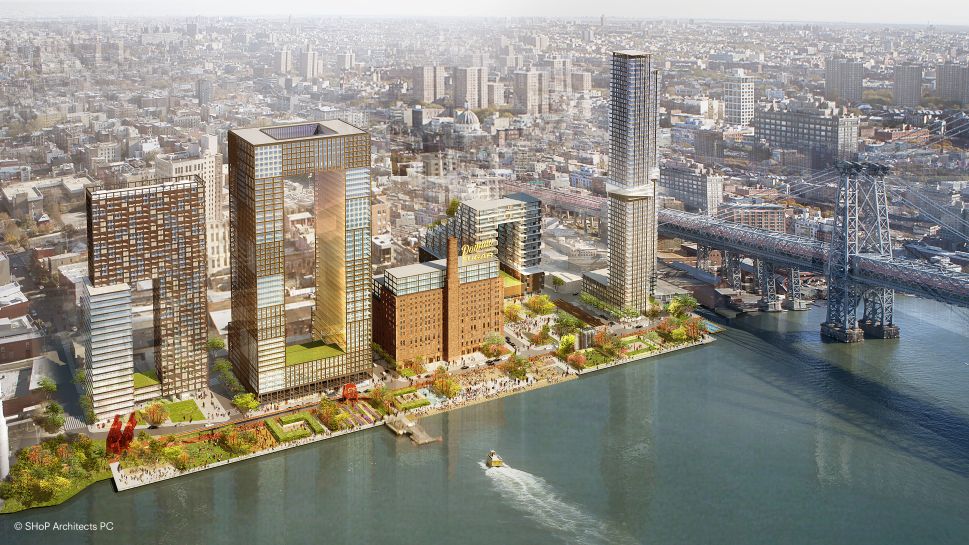