A source told PolitickerNJ.com to watch state Sen. Ronald L. Rice (D-28) over the course of the coming year leading up to the 2014 Newark mayor’s race.

The senator’s son, West Ward Councilman Ronald C. Rice, is not running for mayor but the elder Rice has not taken himself out of the running.

Running for mayor in 2006, Rice lost to Cory Booker, unsuccessfully captaining a campaign hampered by a very short runway caused by Mayor Sharpe James’ refusal to announce his election intentions until the last minute.

The source said Rice quietly craves a bigger organizational straightaway and a shot at the mayor’s seat, but if that’s true, Rice today insisted he’s not thinking about mounting a run.

“You never say never,” he told PolitickerNJ.com. “But the mayor’s election is next year. My concentraton is on this year’s election. People are taking too much time focusing on next year. The focus this year should be on getting a new governor and on making sure we do not lose our Democratic majority.”

Rice said if Gov. Chris Christie wins again, “You won’t get help from a governor or a Republican admininstration. It’s crucial to get a Democrat in there to give a critical ally to whoever the mayor is next year.”

“If we are not there to assist the elections coming up, it will be problematic for Newark,” Rice said. “People need to understand that this is a big vote and we need to come out in 2013. Next year is going to take care of next year. Whoever the mayor will be, Mayor Booker does not want to be mayor. They need to take a look at the candidates, but in the meantime we have to stay focused.”

North Ward Councilman Anibal Ramos and former counsel to the state AG Shavar Jeffries are soon to get in, sources say. 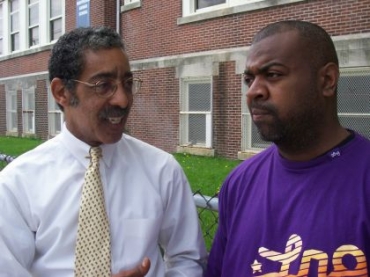