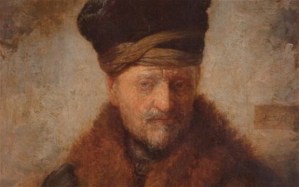 A detail of the work. (Courtesy Novi Sad City Museum)

This is shaping up to be a pretty great workweek: day two delivers a second Rembrandt story. (Yesterday the Brooklyn Museum announced it was opening a small Dutch painting display with two Rembrandts.) The news today is that Serbian police have recovered the artist’s Portrait of the Father (circa 1630), which was stolen from a museum in Novi Sad, Serbia, in 2006. Four suspects were apprehended in Sremska Mitrovica, Serbia. Three other works plucked from the museum—a Rubens, a Francesco Mola and a piece by an unknown artist—have not yet been recovered.

More details come via The Telegraph, which notes that the Rembrandt has a rich history of being stolen:

The painting, which the museum estimated was worth 2.5 million pounds (2.8 million euros, $3.7 million), was stolen in January 2006. It had already been stolen 10 years earlier but was recovered in Spain…At the time police said that two masked and armed robbers broke into the museum and tied up two employees on duty before making off with the paintings…