In the conference room at a Brooklyn shared work space called Williamsburg’s Secret Clubhouse, Small Girls PR sits around the table planning out the week ahead.

Mallory Blair, the company’s 24-year-old co-founder, runs through the prospective clients that have approached the agency: an iOS social app called Ketchup, a line of shoes called Portovelo and a new line of pants for petite girls called Lilipantian. “Which is awesome, because we’re small girls,” said Ms. Blair. (It didn’t pan out, though, according to Ms. Blair, because the fledgling company couldn’t afford her agency.)

Since its launch two and a half years ago, Small Girls has, among other things, organized an anti-SOPA party for Google at last year’s SXSW, promoted the opening of Brooklyn’s first Pinkberry outpost, and helped General Electric plan an innovators’ brunch at this year’s SXSW, where the company showed off a “Barista Bot,” a 3D printer of sorts that takes a picture of a human face and etches it into latte foam.

The pairing seems unlikely—the sixth-largest company in the U.S. and an adorbs startup—especially if you consider the Small Girls website, which calls to mind a bowl of Lucky Charms (pink bows! silver studs! red hearts!) more than, you know, Thomas Edison. What the Small Girls seem to have figured out is that few things are more compelling to a stodgy brand than a cloyingly cute one to front for them. (To paraphrase Edison: Branding is 1 percent inspiration and 99 percent branding.)

Whereas public relations has traditionally functioned via an invisible hand, Small Girls leverages their bubbly-fun factor by putting themselves front and center in many of their clients’ campaigns. To promote an online retailer of prom dresses, Ms. Blair and Bianca Caampued, the company’s 28-year-old co-founder, dressed up as if for prom every day for 30 days. For HowAboutWe.com, the dating website, Ms. Caampued went on a live-streamed blind date while Ms. Blair offered live commentary. “The Internet has really shifted the way that people do business and how they talk about their lives and themselves,” said Ms. Caampued. “There’s a level of oversharing.”

Even when they’re behind the scenes, the Small Girls often manage to pop up for a cameo. As part of some campaigns, they send bloggers and journalists “care packages” containing promotional materials and a postcard starring illustrated versions of Ms. Blair and Ms. Caampued holding a terrified-looking anthropomorphized cupcake.

“Any client that we represent has to fit into the Small Girls story,” said Ms. Blair. They’ve turned down plastic surgeons, for example, and clothing lines that they would not deign to wear. “Something that we wouldn’t actually use ourselves is impossible for us to do,” said Ms. Blair. “If we’re going to promote a brand, it has to be something we feel passionate about.”

Small Girls, which has four full-time employees (and was hired by The Observer to publicize the Betabeat launch in 2011), bills itself as “a creative agency specializing in social interaction both online and off.”

Offline, the founders’ social calendar brims with parties and panels (including one recently at Harvard Business School). Ms. Blair counts 4Chan founder Christopher “Moot” Poole as a close personal friend. She wrote her senior thesis at NYU about Mr. Poole, and the two traveled to Europe together last summer.

“They seem to know everybody,” said Mark Mangan, chairman and co-founder of FlavorPill, which hired Small Girls to promote the relaunch of its site. While acknowledging that it is unusual for a PR agency to be so thoroughly branded, he said, “They seem like they’re having fun.”

That last point is hard to deny—they are fun! But since when does that matter so much? As brands creep like kudzu through our online social spaces, public relations people are never far away, with watering cans and Miracle-Gro in hand. Products of this milieu, the Small Girls have made the conscious decision not to hide their tools, but instead to festoon them with bows and paint them in pastel. 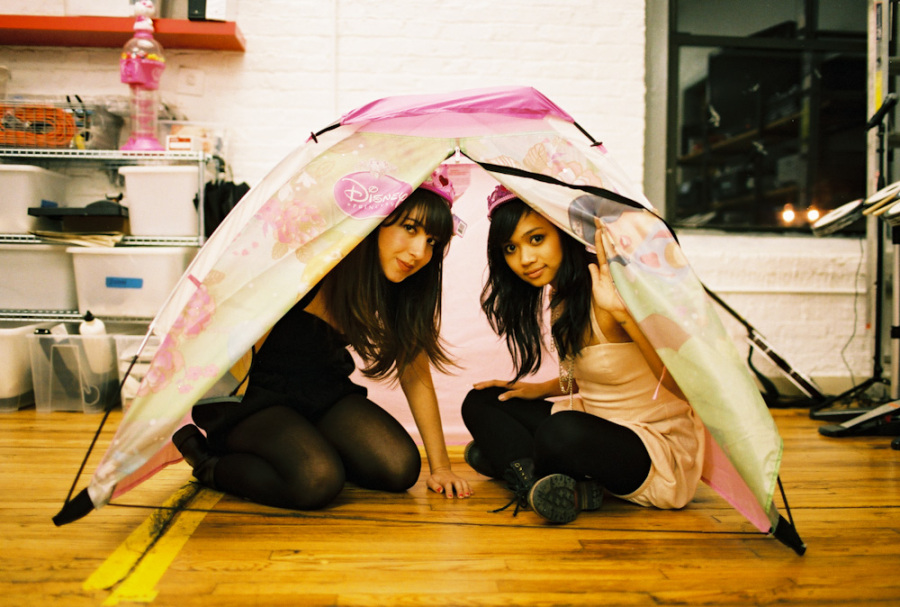