EAST BRUNSWICK – Looking very much at home in New Jersey’s classical architectural environs: rain gray diner dimly lit in the rain on the side of a highway, in this case, Route 18, East Brunswick Mayor went into the embrace of the Republican Party this morning and announced he is running for the state Senate.

“I am changing my party affiliation but not my principles,” said Stahl, flanked by Senate Minority Leader Tom Kean (R-21) and Sen. Sam Thompson (who also chairs the Middlesex County GOP).

“I stand before you to represent the 18th District as a Republican,” he explained.

Stahl is running for the senate seat Barbara Buono is giving up in order to run for governor against Republican Chris Christie.

He badmouthed the Democratic Party, in his prepared remarks choosing to pick apart the Middlesex County organization.

“The party is not the party of John F. Kennedy, nor the party of Bill Clinton,” Stahl said. “The Democratic Party of Middlesex County resembles all of what is wrong with politics today.”

Thompson felt obliged to point out that Ronald Reagan was once a Democrat.

And, “I was born a Democrat,” the Louisiana native added. “I didn’t meet a Republican until I went north to North Little Rock, Arkansas.”

The crowd was still laughing as Stahl said he would take some questions.

“I will tell you who I support as governor in 2013 – Gov. Chris Christie,” said the grinning mayor, swatting aside a reporter’s question about whom he supported for governor in 2009 and president last year.

“”Whether you’re in Washington or here, there is a lack of bipartisanship,” Stahl explained, ducking a specific question about whether he faults President Barack Obama for the so-called dearth of bipartisanship in the nation’s capital.

Very conservative on fiscal issues, and socially moderate, he added, when asked to describe his positions.

Stahl said he spoke with Christie at the Republican National Convention (RNC) about a potential candidacy. 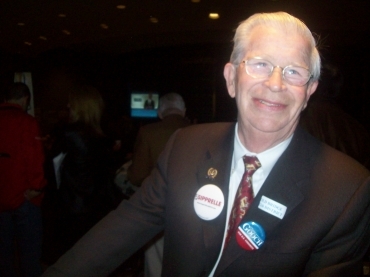