“Now, it sounds like kind of a joke,” Jonathan Gottfried warned us before launching into an explanation of Drunkspotting, an app that lets users upload photos of drunk people and then draw on them. (Think Instagram meets DrawSomething meets jello shots.)

Mr. Gottfried, a developer evangelist at Twilio, also served as a conductor for this year’s annual StartupBus competition. While roadtripping to SXSW, 37 teams hacked together startups and prototypes on the fly, with judges declaring a winner in the middle of the interactive festival.

Drunkspotting was actually formed on a shuttle bus after the prizes were awarded. “There was another team from the Mexican bus called Cloudspotting that had developed an app where you take photos of clouds and draw on them,” Mr. Gottfried explained. “It was kind of cutesy and fun. Drunkspotting started out as a parody of that, but it quickly became very very serious.”

Or at least as serious as a startup with 46 CEOs can be.

The real winner of the Startupbus competition was a much more high-minded venture: CareerMob, a job search site for veterans that helps match military skills to civilian openings. “Essentially every military member has a code that they are assigned, which corresponds to their position and from that you can actually determine what training they’ve had and what kind of skills they’ve developed,” Mr. Gottfried explained. The site, which was created by a New York City-based team that included one active duty Air Force member, already has interest from investors and companies who want to be part of the job database.

But Drunkspotting isn’t the first startup idea that relies on overindulgence for content–and it may have some (wobbly) legs.

Both Mr. Gottfried and Robert Scoble advised Drunkspotting, which launched an HTML5 app and plans on releasing an API and native apps for mobile. (The cofounders’ attempts to raise funds to combat liver disease, however, clocked in at just $200.)

On the phone with Betabeat, Mr. Scoble called it a fun app. “We all have smartphones now and there’s these new breathalyzers that just shipped at SXSW called Breathometers,” he said. If Drunkspotting found a way to hook it up to the Breathometer, “I could forsee a whole new way of playing drinking games, I guess,” he added with a laugh.

Early traction came from the beer-soaked hordes in Austin, with users uploading images of attendees like Ashton Kutcher, Shaq, Coolio, and Dennis Crowley. If you ask us, blowing up your drunk friend’s spot is kind of a party foul. That might be why Mr. Scoble recommended some sort of “privacy model,” so that pictures could only be shared with friends.

“The problem, if there is a problem, is that drinking games encourage bad behavior,” Mr. Scoble added. “On the other hand, it has a social aspect of catching you in your bad behavior and then making fun of it. So it’s a social retardant on drinking too much.”

Jacek Michal Grebski, one of Drunkspotting’s many cofounders, had a more blase attitude about it over email. “Celebrity drunkspotting is still pretty funny, I mean this is Perez Hilton’s dream come true. Right? Or did we just make him irrelevant? ;)” he told Betabeat.

We first met Mr. Grebski at a the third annual Awesomest Journalist Party where he was sporting wristbands that lit up when you knocked them together and a Drunkspotting branded “Waste the Rainbow” t-shirt.

“We’re kinda hoping for our second cease and desist from Wrigleys,” he confessed by email this week. In the meantime, Mr. Grebski and the rest of the team are working on moving the app to more scaleable server architecture before they push it out to college campuses and add anonymous commenting and social sharing.

Regarding monetization, he said, “We have a few meetings set up, but in all honesty, we’ll just figure it out later, or maybe sell for 101 million, because it’d be funny to go bigger than Mailbox. ;)”

“The cool part about all this,” Mr. Grebski added, “is that we’re pretty much breaking all the ‘laws’ of how you ‘should’ do things in the startup world, it’s a little bit joke, a little bit serious, and a little bit trolling the startup ecosystem.”

Who isn’t a troll these days? 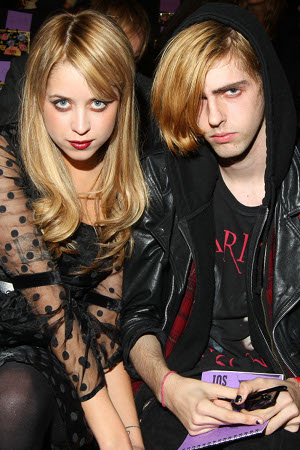