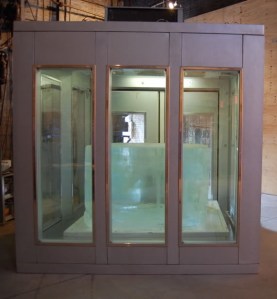 (Courtesy the artist and Pierogi)

The Venice Biennale announcements just keep on coming! The latest nation to release its plans for its national pavilion is the Bahamas, which announced that Tavares Strachan will represent it at the grand show, which runs June 1 through Nov. 24 this year.

Mr. Strachan is probably best known for his 2006 piece The Distance Between What We Have and What We Want, a sculpture made with a 4.5-ton hunk of ice from Alaska that was kept frozen in a refrigerated container and exhibited at various venues, including the Pierogi Boiler in Williamsburg in 2009.

Here’s a bit more about what the artist has in the works for the pavilion, via the Biennale’s news release:

The main exhibition space will feature a 10-­‐foot, 360-­‐degree video installation. Fourteen monitors will play documentation of Strachan’s reenactment of a historic narrative: the 1909 polar expedition of Robert Peary and Matthew Alexander Henson. Henson, Peary’s associate, is often credited as the first American to reach the pole. However, various written and oral iterations of that journey—whether Henson reached the Pole before the physically incapacitated Peary, whether Henson planted the American flag, and their complex relationship to one another and to Inuit communities—remain fluid and contested, more reflective of shifting ideologies than historic truth.