ELIZABETH – His detractors say he has a single gear: fighting gear, a characterization Assemblyman Joe Cryan (D-20) strenuously resists, preferring those storylines that reveal him to be more a careful maker of moves than blindly wind-milling political pug.

Tossed out of leadership two years ago, his statewide counterattack defused, Cryan fell back to Union County where he has quietly regenerated as a countywide force, tormented at times more by his powerful running mate than his running mate’s longtime local enemies – a situation that tonight has Cryan very carefully sizing up the terrain, sources say.

Cryan was primed for maneuver warfare as early as this year if need be, a plan that put everyone around him in the Union County Democratic Party organization on high alert.

Even after the party convention, no one appears any less rattled.

Headed by former Board of Education President Rafael Fajardo, and motivated by a longstanding political animus with Cryan running mate state Sen. Ray Lesniak (D-20), the board is again expected to use the port city as a starting point to build its own countywide renegade ticket.

Their team is not yet set amid continuing backroom meetings, and although the Union County Democratic Organization ratified the Lesniak-Cryan alliance last month, relations between the two LD 20 protagonists remain rocky at best.

The source of their ongoing awkward relations is no secret.

Cryan starts with a firm hold on his base. As evidenced by his ticket’s strong 2011 performance in Union Township, the veteran populist assemblyman and former state party chair has his hometown on virtual lockdown. He also has a patronage building block at the sheriff’s office and very strong labor ties.

After their successful 2011 primary, Cryan figured he had sufficiently demonstrated his district-wide import to Lesniak, a power broker with close ties to South Jersey uber-boss George Norcross III who nonetheless did nothing to prevent South Jersey Democrats from dethroning Cryan from his assembly majority leader position later the same year.

PolitickerNJ.com observed the two men at the statehouse one afternoon in the aftermath of that 2011 election. Each arriving from separate rooms, they boarded an elevator in gloomy detachment, each with his eyes uncomfortably straight ahead.

Cryan’s disciplined organization had helped Lesniak win re-election, by the reckoning of his allies, and the assemblyman had hoped Lesniak would help restore him to a position of power in the lower house Democratic caucus.

For his part, Lesniak was grateful to Cryan for the door-to-door portion of their re-election effort, but he also took pride in keeping the Board of Ed pinned down in court for much of the campaign, and took credit for exposing the Elizabeth Board of Ed’s malfeasance over the course of the last two years.

Cryan figured he wouldn’t need that expertise if he didn’t have Lesniak around in the first place.

Aware of the Lesniak-Cryan gap and fatally at odds with Lesniak, the Elizabeth Board of Education this year recruited Cryan hard for the top spot on a ticket that likely would have included former Councilman Tony Monteiro.

Cryan toyed with the idea.

As he did, Lesniak toyed with a very public effort to recruit an alternative to Cryan’s gubernatorial candidate, state Sen. Barbara Buono (D-18).

Cryan was an early and key backer of Buono’s, whose presence on the daily telephone calls and follow-up legwork with organizations he knew intimately from his days as state party chair filled a tremendous void in Buono’s fledgling statewide cause.

“He’s the political intelligence here,” a source told PolitickerNJ.com, and as Buono – herself discharged from leadership at the same time as Cryan – attempted to reconnect with the party establishment, regional operatives around Norcross agreed that Cryan lent heft to the Buono effort.

“That’s the smartest move Buono has made – aligning herself with Joe Cryan. He has the contacts, the credibility,” a South Jersey source told PolitickerNJ.com.

As Cryan shouldered the Buono campaign, his district-mate playfully shot down her prospects.

While a source close to Lesniak claims the senator never knew of Cryan’s closeness to Buono, the disconnect underscored Cryan’s and Lesniak’s LD 20 tensions.

As Lesniak gushed about Codey on FaceBook, the assemblyman called for an LD 20 meeting.

Pulled at by the Elizabeth BOE, Cryan sat down with Elizabeth Mayor Christian Bollwage and the senator and discussed their willingness to recruit a new ticket-mate for the LD 20 ticket: Tony Monteiro, longtime inner circle general of the Elizabeth Board of Education.

“The only reason we have these troubles, Chris, is because you can’t win a school board election,” Cryan reportedly told the mayor.

A source close to the meeting said no one ever specified who on the incumbent LD 20 team would walk: Lesniak (the oldest), Cryan (who was also said to be eyeing the prospect of running for sheriff), or Assemblywoman Annette Quijano (D-20), the least powerful player of the three but as such the most likely to look like a victim if Monteiro replaced her.

A source said Cryan urged the Monteiro compromise in the name of peace.

The goal would be to avert a repeat of 2011, Cryan told Bollwage and Lesniak.

They never got to the point of figuring who would have to stand down, however, as Bollwage didn’t want any part of empowering the Board of Ed.

Monteiro was a sworn enemy of the mayor’s, the mayor said, not to mention a proud backer of Gov. Chris Christie’s 2009 campaign. He didn’t want him on the team.

Bollwage spoke from a position of strength, having destroyed his BOE opponent in his 2012 re-election.

Cryan accepted the mayor’s position, but he had made his point.

What was happening concurrently on the other side of the county did not give him any added sense of comfort.

A source told PolitickerNJ.com that a poll in the field showed Robinson-Briggs weak as she prepares to run for a third term.

“You’ve got to run, Jerry,” Lesniak told the assemblyman, urging Green to replace Robinson-Briggs as the mayoral candidate.

Green considered it, even went so far as to resign himself to doing it, content with a good stretch of service in the assembly, but Robinson-Briggs refused to stand down. The two have the same base. If Green ran with Robinson-Briggs still in the contest, Mapp would win.

Unable to dislodge the incumbent and with no way of making a Green candidacy work, Lesniak and DeFilippo strongly considered supporting Mapp.

Not only was the anti-establishment councilman a longtime sworn political enemy of the assemblyman’s, but he was strongly aligned with the new mayor of Orange, Dwight Warren. Long in charge in Plainfield, Green did not want Essex County running his town.

But Cryan had his own reason to be very wary of a DeFilippo-Lesniak-Mapp alliance.

His former stalker, Karen Golding, was fundraising for Mapp.

That fact caused Cryan to re-examine his so-called alliance with Lesniak, ratified by the county organization, but still plagued and shakier by the minute as the assemblyman considered – with increasing alarm – the notion of Lesniak supporting a cause advanced by Golding.

Sensitive to the Cryan back story, a source close to Lesniak said if Golding were part of Mapp, Mapp was out as far as Lesniak was concerned.

Yet if Lesniak and Cryan had agreed to run on the same team again this year, and had looked hard at their mutual internal fractures, they could not remove a mutual sense of unsteadiness.

Cryan added up the following: Lesniak’s lack of support for him during the leadership fiasco, the fact that he was again marching into another potentially devastating battle against Lesniak’s – not his own – enemy, and now the Lesniak-Golding connection.

At the very least, the men were convinced of the wisdom to run separate campaigns: Lesniak his own and Cryan his own with Quijano.

Even with the imprimatur of the county organization on the LD 20 incumbent team, sources say Lesniak this week began arming himself for a lone wolf run – just in case – reaching out to Garden State Equality for ground troop support, and intensifying his path to citizenship to campaign in the Hispanic Community.

“My Spanish is better than Michael Bloomberg’s,” cracked the veteran senator.

This Friday, he plans to unveil his first Spanish television advertisement.

A source told PolitickerNJ.com Cryan was still brooding on the situation, his fighting spirit calm at this precise moment, a quality no less at the ready but also, in this case, one the assemblyman does not want taken for granted. 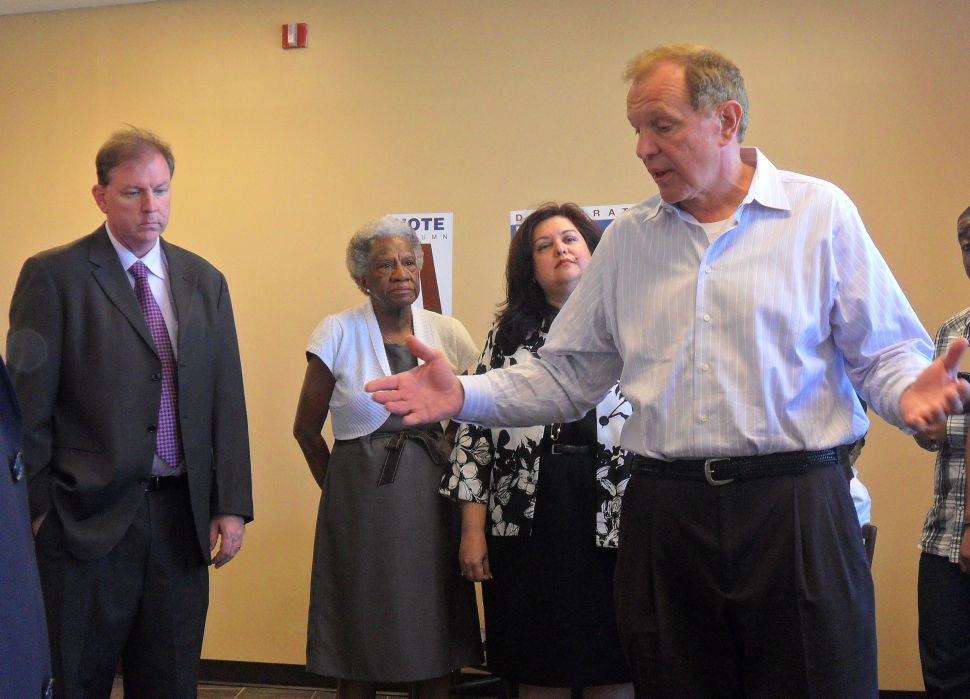