Stung by his rival in the Jersey City Ward D Council race, the Rev. Mario Gonzalez, an ally of Jersey City Mayor Jerry Healy, told assemblyman Sean Connors (D-33) that Connors might as well launch a salvo against his own faith if he truly believes in the attack he executed against Gonzalez.

“As Councilman, I will fight for everyone regardless of race, religion, creed or what neighborhood they’re from,” said Gonzalez, a member of the Assembly of God Church, in response to Connors.

“I was called to the ministry because I saw people – gay and straight – suffering from AIDS and dying in isolation and pain,” the Healy candidate added. “I was there in their toughest moments. I expect to do the same for the wonderful people – my extended family – in Ward D.  To attack me for my religious affiliation is analogous to attacking a candidate for being an observing Muslim, an Orthodox Jew or a Roman Catholic – a Church which coincidentally shares the Assembly of God’s same theological position on the matters addressed.”

Running against Gonzalez in Ward D, Connors zapped Gonzalez earlier today for his membership in the Pentecostal Church, which draws the line against gays and opposes pro-choice.

“This is frankly an ad hominem, pejorative attack on all people of faith,” Gonzalez said. “If Sean actually said this, which I seriously doubt, he should be ashamed of himself, and quite frankly should go to confession sooner than later. I’ve always considered Sean a friend and am deeply dismayed and troubled by these shockingly divisive statements. I would expect Sean Conners to call me personally to apologize. He has my cell number.”

The Healy Campaign rushed to their candidate’s aid.

“Once again, we’re seeing how Steve Fulop will literally do or say anything in his desperate, self-serving bid to attain power. Mayor Healy was one of the first in the whole country to endorse Barack Obama and shares the President’s values,” said Joshua Henne, Healy’s campaign spokesman. “The fact that Fulop again took his campaign into the gutter strongly indicates they’re running scared. Team Fulop already has one council candidate who thinks it’s funny to say everyone in Ward F has a criminal record, and now Fulop and Connors are attacking Rev. Gonzalez.

“I will say, however, that we completely agree with what Sean Connors said in September – that ‘Mr. Fulop can not relate to the struggling working class residents of Jersey City,'” the spokesman added. “Call Connors again next month and perhaps he’ll change his mind again and go back to calling Fulop a Wall Street One Percenter.” 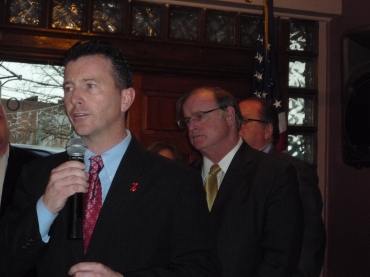