For the most part, though, Logan is able to end each relationship without drama or histrionics, thereby alleviating his guilt and lessening the chance, in his opinion, that some boyfriend or pimp will come calling. “I don’t just drop them,” he says. “I try to present a façade that this could continue. Maybe talk on the phone a couple times. Text back and forth, and then let things fizzle away slowly. I don’t want a girl to feel like I just used her to bang her, even though that’s true.”

Logan shrugs. “I think I’m a mensch at heart.”

But of course there’s zero chance for any of these relationships to continue—even with those women who don’t think he’s some tech magnate, who just think he’s an ER doctor or a plastic surgeon or an anesthesiologist, if not a medical student—because Logan says he will only marry a Jewish girl, and he believes dating to be a slippery slope. “Once you give them your real name and your real story, then I think you open yourself to the possibility that you might actually connect with that person, you know?” Logan says. “As long as I’m wearing this mask and have this façade on, it’s always going to be only half-serious.”

He laughs. It’s all a joke. A joke he brings back to his Orthodox buddies, most of whom are married with kids, just drooling for details. And in talking with Logan, it’s easy to see why he frames his exploits as sport. Of late, Logan has gotten a taste of being on the other side of the power equation as well, having recently taken up with a sugar momma. She is 41, Jewish and knows his real name. The morning after they first slept together, the sugar momma offered Logan some money, which he didn’t take.

I wondered why. Did he feel objectified? “I guess so,” he says. “I guess ‘objectified’ would be the right word.”

Logan says he has not accepted cash from his sugar momma. Instead, she simply pays for everything—and he tries not to feel emasculated. She is also considering offering Logan an unofficial consulting job, since her law firm deals with a lot of medical malpractice cases, for which he would receive a sort of salary. Logan jokes that if this were to come to pass, he could become “kind of a sexual Robin Hood.”

“Taking from the rich, giving to the poor,” he says. But the more likely scenario, he says, is that he will eventually be given a key to her luxe downtown apartment, which he could then use to host other girls—like the supposed Playboy model from Miami whom he met through his time on SeekingArrangement but flaked at the last minute, two weekends back. “That would be so wrong in so many ways,” he says, before adding, “but it’d be really helpful.”

Not that Logan is opposed to dating toward marriage, if the right woman were to come along. In the insular world of Orthodox Judaism, Logan is already playing catch-up with his married friends. But finding his bashert (the one he is meant to be with) is proving increasingly difficult as his conquest tally rises. As his buddies’ wives balk at setting him up with their friends, his matchmaking prospects falter.

“Don’t tell your wives that I’m doing this!” he says he tells his friends.

But even if he can keep his sordid social life out of the Orthodox rumor mill, one wonders: what of his eternal God-fearing soul? How can Logan possibly square his actions with his religion?

“The lies?” he says. “I don’t feel like there’s someone keeping track.”

Then why go to synagogue on Shabbos? Why keep kosher? Why do any of it?

“We come from a 3,000-year-old narrative of people doing things the same way,” he says. “It’s not because I fear there’s an old man with a beard up there that’s going to smite me that I do the rituals … Everything I’m doing is totally immoral. It’s unethical.” But then, just as he seems to be staring the wickedness of his ways square in the face, he begins to backtrack: “With respect to the SeekingArrangement girls, they’re all gold diggers, transparently. They’re not good people. If you can assign a judgment to a person based on their affiliation with a website, I think this is the place you can do it. So I don’t feel that bad.”

As for the PlentyofFish women: “We’re having a nice time,” he says. “They don’t know that they’re being misled. Aside from my name, the fact that I’m an Orthodox Jew, that I’m only going to marry a Jewish girl, that I’m not going to date you or take this seriously—aside from that, I’m totally honest.”

And then he changes the subject, having resolved to suffer no crises of conscience, returning our collective attention to a series of photos on his iPhone, flipping through until we land on an image of a very young woman in a full Batman costume. She is, Logan informs me, 17 years old.

Huh. But wouldn’t she have to be 18 to sign up for a dating site, I wonder?

“It’s not hard to lie,” Logan assures me. “Especially on the Internet.” 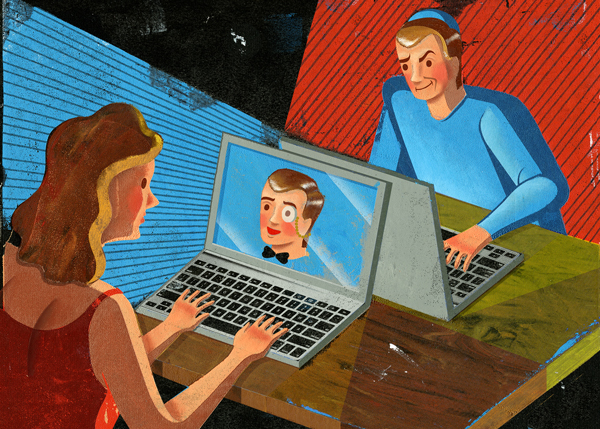