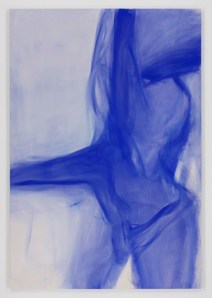 “I like a sudden appearance, when you look down on the marble bathroom floor, or in wood, and you see a face in it and it is always a different face,” the artist Rita Ackermann said last week. She was standing inside Hauser & Wirth’s Upper East Side gallery, where her latest show just went on view.

A few years ago, Ms. Ackermann, 44, had that uncanny, Rorschach-like experience while she was working in her studio in the Brooklyn Navy Yard. She mopped up some paint with a poster and discovered a strange, curvy figure. Since then she’s painted it on many of her canvases, in rich shades of blue or red, and sometimes both. She calls the series “Fire by Days,” a play on a line from a poem by the French modernist Roger Gilbert-Lecomte. 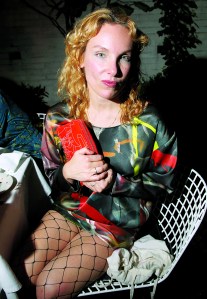 “Sometimes I like when the gestures disappear—the brushstrokes, and gestures disappear—and it’s more just a well-conducted chaos of stains,” Ms. Ackermann said. She starts with her canvas unstretched so that she can work it hard with sponges, brushes and her hands. She made the most recent painting in the show (Fire By Days Blues X, 2013), which is more than nine feet tall, just two weeks before the opening. It’s even more abstract than the others. “This one was really pushing through itself very fast,” she said. “Didn’t let me have too much time to think about [it]…between each take.”

If you’re familiar with her work, meeting Ms. Ackermann is a fairly surreal experience, because she appears—or at least some version of her appears—as a character in many of her best-known paintings and drawings. She’s there as the almost-identical almond-eyed young girls in underwear, lounging, talking on the phone or quite literally navel-gazing in her earliest works from the first half of the 1990s. The character has appeared repeatedly since then, at different ages and in (often erotic) poses and guises. In person, she’s warm and energetic and laughs frequently. She took off her jacket as we talked and pulled on her hoodie’s hood, stretching her legs as we toured her show. She looked like a boxer getting ready for a fight. When Ms. Ackermann moved from Hungary to New York in the early ’90s (she still has a trace of an accent), she fell in with an arty downtown crowd and alternated between fashion projects, art-making and playing in various noisy bands. There are a lot of stories, though she prefers not to talk about that period, wanting to focus on her new stuff. She’s in the midst of a sea change, maybe the biggest yet in a career that has seen plenty, moving from various kinds of relentlessly grotesque imagery—dense packages of images and marks—into a raw, unsettling abstraction. The final line of Gilbert-Lecomte’s poem talks of “A brushstroke / Signifying absence.”

The title of the show, “Negative Muscle,” shares the name of a 2010 canvas that augured her stylistic change. She made it after finishing a collaboration with the filmmaker Harmony Korine that had her painting over parts of some of his film stills. A headless cartoonish body stands near the center of that painting, only half visible, as if the other side of its body has slipped into the ether, erased by the smears and smudges that surround it. It’s a picture of a body coming undone. “For the first time, it felt like I was not trying to compress everything into one painting. I would let space do its own free will,” Ms. Ackermann said of that pivotal work. “I was getting tired of my own information, started listening more to the liberated painting. The violence almost disappeared in this one, because of it being so left alone.”

Ms. Ackermann fights with her paintings. “I try to work on my paintings until they are unworkable…it does not always mean that they’re finished,” she said. “Sometimes that just doesn’t happen. It could happen that I push one over the edge. If that happens the painting might burn out.” But right before that happens, she flips the painting over to see if anything interesting has bled through to the other side, as happened in Air Possessions (2012). She’ll add a few patches of color, but otherwise leaves things radically blank, made through only the few chance remnants of her efforts. Lately, plenty of young painters have been smudging up their canvases, aping work that Ms. Ackermann and some other influential artists, like Josh Smith and Joe Bradley, were making a few years ago. “It is an aesthetic that makes people feel comfortable with the work,” she said disdainfully, as we examined a piece from that period, Without a Body (2010), in which her almond-eyed girls return, one in heels puffing a cigarette. “That’s one thing I do not want, to make a painting that will make the viewer feel comfortable.” She’s called such work “designer art.”

Shifting between mediums and styles over the years has won Ms. Ackermann her share of detractors, and some brutal reviews. She’s channeling the old tropes of the heroic painter, battling the canvas, trying to make something new, throwing herself into the work. The fact that she’s a woman doing that probably doesn’t help. “I’m not very popular that way with the trends,” she said, when I asked her about upcoming shows. “I’m not very often asked by institutions.” She was looking forward to starting on new paintings. “I’m just happy when I’m working,” she said. “Because not working is just too much thinking.”

“I see my practice as an ongoing practice,” she added. “There is not an end to it. There is a show, and then there is maybe, hopefully another show and hopefully another show. There will be always something different developing, not necessarily for better or worse. And it’s going to be finished when I die.” 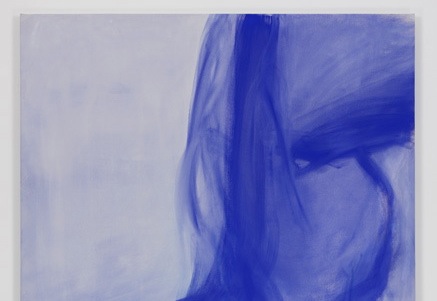