State Sen. Robert Gordon (D-38), however, said he is concerned about the Christie administration’s selection of the Florida debris removal company for a no New Jersey-bid $100 million job for cleanup in the aftermath of Hurricane Sandy.

“The one thing I’m trying to do is provide some transparency,” said Gordon. “This administration has not been forthcoming regarding the circumstances of the awarding of the AshBritt contract.”

Gordon said he does not intend to probe company representatives on AshBritt’s job performance. He simply wants to understand the process, he says. He finds it discomfiting that the administration piggy-backed on the company’s services already awarded by the State of Connecticut, a practice discouraged by the Federal Emergency Management Agency (FEMA).

Bramnick has consistently defended the Christie administration’s use of AshBritt.

“At the end of the day, as the facts unfold, they will show what our governor decided to do was a good decision,” Bramnick said.

Notwithstanding Democrats’ insistence on the need for the hearings from a good government standpoint, the lead organizer of the joint oversight committee, Senate President Steve Sweeney (D-3), has selected a team that includes two senators who occupy inarguably prominent political roles at the moment.

The first of these is Gordon, who once again faces a battleground re-election situation in the 38th District. The 38th is one of those battlegrounds Kean has targeted as a potential district to pick up a Republican representative.

The second is Buono, the Democratic challenger to Christie, whose presence on the committee will give her a platform to go toe-to-toe with the administration.

This is Buono’s chance as a candidate to lay out the pre-debate AshBritt case against the governor.

“I hope he will be fair,” Bramnick said in the case of Gordon. “That’s his reputation, that of a fair guy, and he is in an interesting situation given the political nature of this hearing.”

Gordon said he doesn’t see his position on the oversight committee as a glamorous election year stage.

“I’m not interested in political theater, and I don’t think this particular forum offers a lot of political benefit,” said the 38th District Democrat, who mentioned that part of the reason he is a good fit for the chairmanship is because he has a professional background as a management consultant.

The other political dynamic of note is Sweeney versus Kean.

Sources have also consistently pointed to the aggressiveness with which the Democratic Senate president has targeted leading Republican oversight committee member Kean as evidence of Sweeney’s eagerness to expose Kean, who has been just as aggressive in his own right as a recruiter of candidates this year for key legislative contests.

One of Kean’s targets is Sweeney. 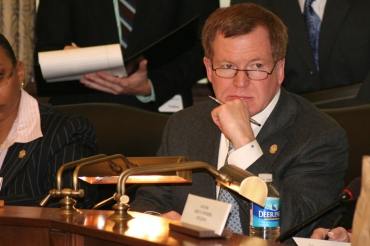