She hasn’t run for office before but as the lead organizer of the Burlington County Young Republicans, she has a history of helping other people run.

She’s seen the mailers. She’s heard the ads. She’s been steeped in the invective and anger.

But she also plays the pivot position for the Penn Jersey Roller Derby league.

That’s a sport that comes complete with helmet, knee and elbow pads – the kind of gear some people feel they could have used after a day in Trenton.

Rodriguez Gregg last night received the formal backing of the Burlington County GOP to replace Assemblyman Scott Rudder (R-8), whose job and family demands have jammed him up.

She’s not just probably the first roller derby star to potentially hit the lower chamber. She would be the first Hispanic Republican woman to serve in the Legislature if she wins in the Republican Primary in June and in the November general.

“I want to see more young people get involved,” said the 31-year-old of Puerto Rican descent who grew up in Willingboro and Burlington, whose parents both served in the military, and whose husband is a veteran of the Iraq War due for redeployment.

Graduating from Rutgers Camden this year with a degree in economics, Rodriguez Gregg has always been a Republican, inspired in part by former Assemblyman Jose Sosa (R-7).

“I admired Eisenhower and was drawn to the core values of the Republican Party, including limited government and individual freedom,” she said. “I registered as a Republican when I turned 18.”

The Burlington GOP prides itself on diversity. Priscilla Anderson served as an African American assemblywoman; Sosa as an assemblyman; Aubrey Fenton was the county’s freeholder director; and the organization has elected two African American sheriffs. It has two women senators.

“This is the party that represents me,” Rodriguez Gregg said. “I think it has always been about the people’s qualifications first. The Burlington County Republican Organization picks the best people.”

If she gets to Trenton, the Republican candidate said she wants to focus on veterans’ issues and improving the economy.

As for the similarities between politics and roller derby, Rodriguez Gregg said she’ll have to see farther ahead on the campaign trail.

But she hopes to see the positive.

“One thing about roller derby is we are diverse, we come from diverse backgrounds, but we put our individual egos aside and work toward a common goal,” she said. “It’s about getting the job done. I like to think it can be the same way in government. I like to think in terms of teamwork. I refuse to be cynical.” 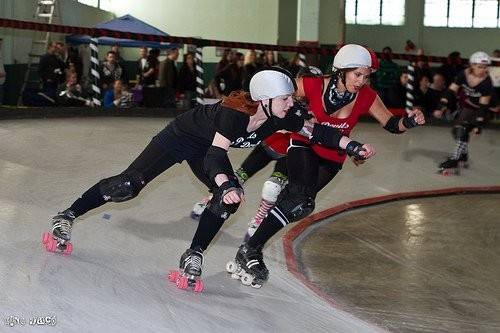