Palazzo Chupi is, among other things, the greatest Julian Schnabel museum in the world. His work hangs in nearly every room of the house. Mr. Schnabel was directing me around The Patients and the Doctors, which was about to go on view in the East Village, telling me to get up close to it, then slowly back away, then to do so again from a different part of the room. The painting is a hulking pink block of Masonite, auto body putty and dental plaster, a lopsided armoire sprinkled with shards of broken ceramic. The shards are painted, and on top of that is more paint, the hint of a silhouette of dismembered body parts, limbless torsos on a plinth.

“I made this painting at 24 East 20th Street, summer of ’78,” he said. “It was an experiment.” He said he chose to work with plates “because of their reflective quality and also the fact that they were things that we’re familiar with, that we eat off of, that we use, that we would recognize. At the same time, because of their familiarity, it was obvious that I was making something that was a real thing, it wasn’t a representation of something, and there was something concrete about that.”

He’d been working as a cook at a restaurant owned by Mickey Ruskin, the founder of Max’s Kansas City, going to the kitchen at 5 p.m. and getting home at 3 a.m., painting until noon, then sleeping until it was time to go back to work.

“When I went to sleep,” he said, “and I’d hear some things crashing, I figured whatever plates were left over when I woke up would be part of the painting.”

The torso, floating as if in a pink primordial soup, is an image Mr. Schnabel returned to again and again in his early years. The first of the four works that went on view in the East Village was St. Sebastian, a representation, in oil and wax, of a skinless, muscled torso. Set against a rouge background, it’s almost pretty—the details of the muscles bring to mind a view through a window of leafless tree branches—but it’s difficult to reckon this with the sheer size of the 10-foot-tall work. To be confronted by it is frightening—embedded inside is all the ambition of a young artist impatiently awaiting fame, an artist who watched a lot of his friends die violent, early deaths, as Mr. Schnabel recounts in his autobiography. Mr. Schnabel makes use of all the big taboos (sex, death, religion, subjectivity), but there are no clues toward making sense of his symbolism. Crucifixes and skulls are stripped of meaning, leaving behind only the raw emotion caused by the image. His best paintings, if they are about anything, are about what it’s like to look at a Julian Schnabel painting.

“That incredibly grand gesture that he makes,” said Robert Longo, one of Mr. Schnabel’s contemporaries, “the best compliment I can offer Julian is I was incredibly jealous when that fucking shit actually worked.”

It didn’t always work. The paintings could be too forceful, or simply too much. The Whitney struggled to find a cargo plane large enough to carry the 20,000 pounds worth of crates that had to travel for the retrospective, and it ended up using three planes. Eric Fischl, who joined Mary Boone gallery just after Mr. Schnabel left (perhaps due to Mr. Fischl’s arrival, at least according to Mr. Fischl), called him “almost embarrassingly Romantic.” But “a lot of what happened in the ’80s wouldn’t have happened if it wasn’t for him. Certainly it would have been a far more boring time.”

“I’m not nostalgic for the old days in any way,” Mr. Schnabel told me on my second visit to Palazzo Chupi. We were sitting in a red room with books piled on a long wooden table and poster boards lining one wall. On the posters were small images of almost every painting Mr. Schnabel has ever made, cross-referenced by date and style. “Because I don’t feel like I’m the Four Tops singing the song that made me popular, like, 30 years later.” Occasionally he’d stand up and point to certain groupings of works and say things like, “The work went from places to other kinds of places, where I discovered that something that was architectural could be pictorial also.”

He’d learned that I had called his first wife (didn’t pick up), David Salle (didn’t want to talk about the past because it “bores the pants off of me,” but sent me a statement saying “if a man likes to go about town wearing pajamas, I don’t see why that should bother anyone else”), Pace Gallery’s Arnold Glimcher (no comment), Mary Boone (didn’t return repeated requests for comment) and a number of other people Mr. Schnabel was close with in the ’80s.

“I don’t think that that really behooves you,” he said. He had removed the yellow-tinted glasses and replaced them with clear lenses, and he was looking at me intensely. “It’s not so interesting. I mean, you saw the film Basquiat. I told a story. Mary Boone is a character in that story. Talk about the movie.”

Gary Oldman plays a Schnabel-esque supporting character (one scene is actually filmed in Palazzo Chupi), but the moment that most overtly brings to mind Mr. Schnabel comes when Basquiat, played by Jeffrey Wright, is still struggling, talking with a friend (Benicio del Toro) over a game of basketball:

Basquiat: How long do you think it takes to get famous?

Basquiat’s friend: Four years. Six to get rich. But you’re gonna have to dress right, then you’re gonna have to hang out with famous people, you know? Make friends with the right blond people. Go to the right parties. Socialize. Then, you gotta do your work all the time when you’re not doing that. But I’m talking about the same kind of work, the same style, so people can recognize it and not get confused. You know? Then, once you’re famous, airborne—you know?—you gotta keep doing it in the same way, even after it’s boring, unless you want people to get mad at you, which they will anyway.

There are so many different kinds of Schnabel paintings—on velvet, on cowhide, on tarpaulin that’s been dragged through the dirt—that it would be impossible to touch on even a fraction of them here.

“People in the arts like to put people in boxes,” said Anne Pasternak, the president of Creative Time. “Julian has been one of those people who is insistent that you can’t put him in a box. You hear people say, ‘Oh, he’s really a filmmaker’ or ‘Oh, the films are better than the paintings.’ This is all bullshit. Julian is an artist, and whatever form suits his need best is what he’s going to pursue, and we need to recognize that.”

Mr. Schnabel may not like to dwell on the past, but all the scorn he’s received does wear thin. “There was a lot of attention to the work,” he said, “but the same things that made people excited made them pissed off. That’s not what art is about. It’s about a language.”

There is one moment from early in his career that has stuck with him. In 1982, Mr. Schnabel was the most famous living artist left out of Documenta, the much-hallowed survey of contemporary art that is held every five years in Kassel, Germany. It was not a mere oversight. The organizer, Rudi Fuchs, deliberately excluded him in a gesture that seemed to say to the art world, He isn’t important. He won’t last. Mr. Fuchs has come to regret the decision, and recently he wrote a 50-page essay lamenting the past. Mr. Schnabel wanted to read it to me.

Mr. Fuchs opens by talking about how to incorporate the so-called “American hegemony” into a survey of European art of the last half-decade. Mr. Schnabel now refers to his being left out as “the event.” “It was like being blackballed,” he told me. The way he sees it, all he did was make his work and put his whole life into it. He’d spent years pretending not to care what other people thought of him, but by 1982, he was already the most famous painter alive. Why did they ignore him? He began to read aloud from Mr. Fuchs’s essay: “Finally came the question: what to do with those young Americans: Basquiat, Salle, Schnabel—who were then such hot news?” He stopped, said, “I mean, this can tell you more here than what these guys …” He trailed off, not mentioning the names of all the people I had called. “I don’t know, I’m just saying.”

Mr. Schnabel continued reading to me: “It was decided we would invite Basquiat and David Salle but not Julian Schnabel. The objections against Schnabel were strong and sometimes bitter. Somehow they were right: Schnabel was the most outrageous painter of the three. In Basquiat one could sense a poetic and naive sweetness, and the paintings of David Salle played with cool conceptual artifice. They were clever. Whereas the raw and undisciplined Schnabel brought the wild Rauschenberg to mind. The exuberant paintings of Schnabel were extremely unsettling. The misgivings of some of his older contemporaries were understandable. Even with all his glamorous renown, he was a dangerous outsider.” He stopped again. “I mean, you can read what he says here. So he starts talking about Caravaggio, which is my favorite painting in the whole world—The Beheading of St. John the Baptist, in Malta.”

I asked him why.

“I just think if you look at the painting and the way it’s painted and the miracle of what it physically is, it’s just so … engaging. The perfection of it, the idiosyncrasy of it, the scale of it.”

He skimmed through the next 20 pages quickly, but he slowed down to read the last bit about himself.

“Schnabel is unrestrained and sentimental,” Mr. Schnabel said. “Whatever grandiose or complex images get into his head, in whatever emotional mode—he will try to make it: breaking every rule of style and decorum, bending art where it has to go.” 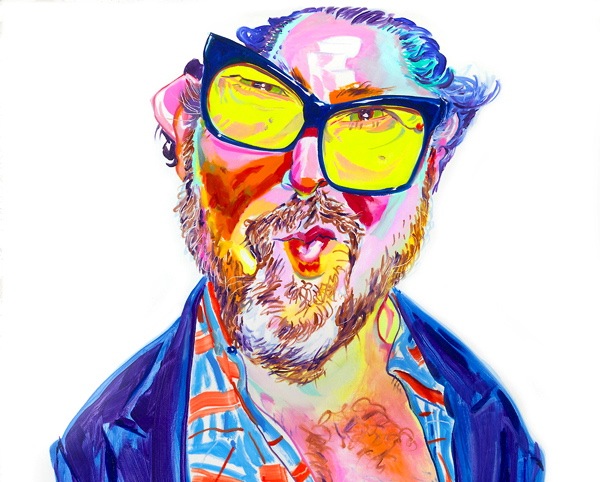