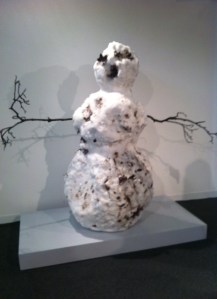 To a greater than usual degree, The Armory Show depends on the weather gods. Previous editions have been all but submerged in March snowstorms, causing taxi traffic jams and lines of disgruntled, frigid collectors. Tony Tasset, a very clever artist, is well aware of this, which is why he asked his Chicago dealer, Kavi Gupta, to install his life-size hyper realistic bronze sculpture of a snowman just outside his Armory booth. “He wanted it here because this fair can succeed or fail because of snow,” Mr. Gupta said at the fair’s bustling VIP preview this afternoon. But there was no snow, and therefore surging attendance, and that snowman had sold by 3 p.m. (for a cool $80,000), along with just about everything else in Mr. Gupta’s booth, which has other pieces by Mr. Tasset as well as other gallery artists like Scott Reeder, at prices ranging from $15,000 to $200,000.

Sales were strong all over the fair today. New York dealer Sean Kelly, an Armory Show veteran, took a break from a conversation with his artist Anthony McCall (whose show is currently on view at the gallery over on 36th Street) to tell GalleristNY that the gallery had parted with pieces by Nathan Mabry, Terence Koh and many others. “Even before the fair started this year there was anticipation that it would be very good,” Mr. Kelly said. “And it’s been a quick start—we’ve sold lots of things.”

Across the aisle from him, Swiss dealer Eva Presenhuber had one of the most talked-about booths in the fair, for its sheer quality and curatorial savvy. “It’s a Basel-level booth,” said New York artist Jeremy Kost, who happened to be walking by the booth, referring to the grandaddy of art fairs, Art Basel, in Switzerland. The Presenhuber booth, which has terrific pieces by Alex Hubbard and others, is fronted by two mask-like sculptures by Ugo Rondinone, made with epoxy resin, fiberglass, soil, jute and other materials. They’re real show-stoppers, and they sold as a pair today, for around 200,000 Swiss francs.

Francis M. Naumann, who brought his Duchamp-centric show down from his 57th Street gallery (he will reinstall it after the fair), sold a piece for $800,000. A representative from Amsterdam-based GRIMM Gallery, which exhibited some delightfully creepy skeletal pieces by Matthew Day Jackson, said her biggest sale today has been $12,000. Lower East Side gallery Eleven Rivington completely sold out its booth of small TM Davy paintings (20 in total) which sold for $2,500 to $3,500 each. A dealer at Sprüth Mager, which has branches in London and Berlin, declined to name a sum, but said work by Barbara Kruger and Rosemarie Trockel, among others, has sold.

Barthélémy Schöller of New York’s Clearing gallery said he’d sold “a few” prints by Ryan Foerster, all priced at $5,000. These aren’t your usual works by the artist, they’re film from his house in Brighton Beach that he developed after it was damaged by Hurricane Sandy. He said he’d been getting a lot of attention for them through the name drop by Dasha Zhukova in her selection on the website Artsy (which is partially owned by Observer Media Group board member Josh Kushner), but then he said, “we would have been surprised if someone walked by and said, ‘Ryan Foerster who’s he? I don’t care.'”

Kim Bourus of New York’s Higher Pictures said her combined booth with On Stellar Rays sold everything but one piece. “Anything Artie [Vierkant] can give me always sells out,” she said. Those pieces were $17,000, and the rest in the booth, by Rochelle Feinstein, were priced between $11,000 and $23,000.

Another New York gallery, Invisible Exports, sold about one-third of the items in their booth, and some editions of those. Split between the artists Paul Gabrielli and Cary Leibowitz, the pieces by Mr. Gabrielli were sold for between $28,000 and $95,000. Works by Mr. Leibowitz were priced at $4,000 for smaller ones up to $65,000.

For an artist’s take on the fair, GalleristNY buttonholed figurative painter Natalie Frank, whose own work is on view at Fredericks Freiser. What’s her favorite booth, besides the one that contains her art? “Victoria Miro,” she said, without missing a beat. “It’s nice to see someone showing just painting—by people like Barnaby Furnas, Alice Neel—with no apologies.”

Update: An earlier version of this post misspelled the name of Kim Bourus.