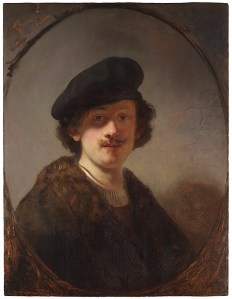 The riches continue to flow for Rembrant lovers in New York. Last year, London’s Kenwood House loaned its remarkable self-portrait by the master painter to the Met. Now the Brooklyn Museum has announced that two works by Rembrant that are currently in a private collection in New York will go on view there on March 18. They’ll be paired with four other Dutch works from the 17th century that reside in the same collection.

The Rembrandts in question are Self-Portrait with Shaded Eyes (1634) and Portrait of Anthonie Coopal (1635). Rembrandt was in the latter half of his twenties when he produced the works. Some tantalizing details about the first work, via the museum’s news release:

“Self-Portrait with Shaded Eyes was hidden for centuries under another portrait. According to Dr. Ernst van de Wetering, chairman of the Rembrandt Research Project (RRP), “the overpaintings were so old one had to entertain the possibility that they had been done in Rembrandt’s own workshop.” The RRP brought in experts to conduct tests on the portrait’s paint surface and assess whether there might be another composition underneath. Six years and several paint layers later, this long-unknown masterpiece was revealed in 2002.”

The 100-year anniversary of the Brooklyn Museum’s first Dutch art acquisition is nearing. Its first purchase was a Rembrandt etching that the museum picked up in 1919.