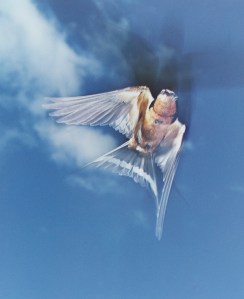 “It actually makes me nervous to stand up to speak about it, because I still go and look at these things way too frequently,” the artist Trisha Donnelly said at the start of her talk at MoMA on Monday night. She was discussing the works in the show that she has organized for the “Artist’s Choice” series, which invites artists to curate from the museum’s collection. Her show, in galleries on the fourth and fifth floors, is on view for three more weeks.

As an artist, Ms. Donnelly throws curveballs. Most famously, she arrived at one of her crowded openings on horseback, reciting a mysterious speech. At MoMA on Monday, she asked for the lights to be turned off in the sold-out theater. She wanted to play some music that had influenced the show.

First up was a recording of 18th-century composer Domenico Scarlatti’s “Cat’s Fugue” on harpsichord that, she said, “somehow, I think, spatially builds and generates a dimension that’s somewhat inexplicable.” She could have been describing her richly enigmatic art, or her show, which is eclectic, historically and otherwise: there are paintings by Redon and Hartley, ionizers, a wheelchair, intricate drawings for microprocessors.

Next came a version of the “Cat’s Fugue” for the Moog synthesizer by 20th-century composer Wendy Carlos (of Tron and A Clockwork Orange fame). Ms. Donnelly asked the technician to turn it louder, and even louder, all with the lights out. She broached the topic of transubstantiation. “It’s maybe a dumb Catholic idea, but the possibility that it might have been a digital suggestion before the digital is kind of interesting,” she said. “It’s pretty radical and actually altogether human and repeated through many belief systems.”

And then, an interlude, as Ms. Donnelly paged through a PowerPoint show of a scrapbook by the American photographer Gertrude Käsebier, which is part of her exhibition. It’s filled with images of the modernist photographer Edward Steichen, looking dashing, sometimes holding a long, thin pipe. “Look at these photos!” she marveled. “They seem so defenseless or something … This was like a love journal of unrequited experience.”

This slipped into talk of Eliot Porter, who, before his death in 1990, forged a singular style of bird photography, and whose work occupies an entire room in Ms. Donnelly’s show. To make his bewitching close-ups, Porter would spend weeks climbing trees, gaining the comfort of birds, and moving nests centimeter by centimeter to make them easier to photograph. Looking at the photos, she said that she thought about “the idea that one point of one bird becomes however many thousands of paths the bird has flown.”

She played an abstract John Whitney film from 1975 and discussed his conviction that a new art form would come to exist, the fact that transistors were used for 20 years for various uses before scientists discovered their potential in microprocessors, and the idea that the Chinese were buried with cosmetics and hunting devices, believing that they would be reanimated. “So, just like a dead being expecting that there will be a regeneration of flesh in the future, by some innovation or finding, [the microchip] plants itself almost as a future discovery,” she said.

An audience member noted that the audio guides for Ms. Donnelly’s show are a little unusual. They have the esteemed art historian Robert Rosenblum, who died in 2006, discussing MoMA’s 1989 Picasso retrospective, a recording that Ms. Donnelly and MoMA’s curators dug up in the museum’s storage site in Queens. (“This museum has a lot of weird stuff like that,” she whispered into the microphone.)

“The feeling when listening to these audio guides was, this was a great work of art … or work of whatever, work of another entity or another state and dimension, existing,” she said. “[They] are so beautiful … It’s like the Taj Mahal of languages, building it himself.” And then she delivered what may be an art writer and lecturer’s ultimate eulogy. “By the end, I don’t need the exhibition at all. I’m awash in this ocean of his funny, brilliant voice.”