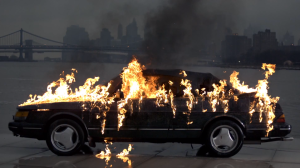 Bombed out, blackened cars don’t exactly pair well with breakfast, but it sometimes feels like every other front-page photo glimpsed between bites of toast depicts a charred automobile chassis in some war-torn part of the world. We’re not sure burning cars go much better with Vampire Weekend’s bouncy new song “Diane Young,” but that’s what you get in the music video, which hit YouTube March 18. The opening lyrics say it all: “You torched a Saab like a pile of leaves.” The slow-motion video documents several cars going up in flames on the edge of the East River (the Manhattan skyline is just visible through the smoke). What better opportunity to look back at the (art) history of vehicular infernos?

Arman, who is currently the subject of a posthumous solo show at Paul Kasmin Gallery, may have launched the tradition 50 years ago with White Orchid, exploded MG car (1963), a convertible he filled with dynamite and detonated in a quarry near Düsseldorf, Germany. He mounted the piece on the wall, confronting viewers with what’s left of the interior. Pyromaniacs peeved by Arman’s decision not to exhibit any documentation of the blast will be gratified by Danish group Superflex’s 2008 video work Burning Car, which follows the fiery destruction of a black Mercedes-Benz from its beginnings behind the dashboard to the all-consuming, crispy finish.

Who burned it best? You decide, below. 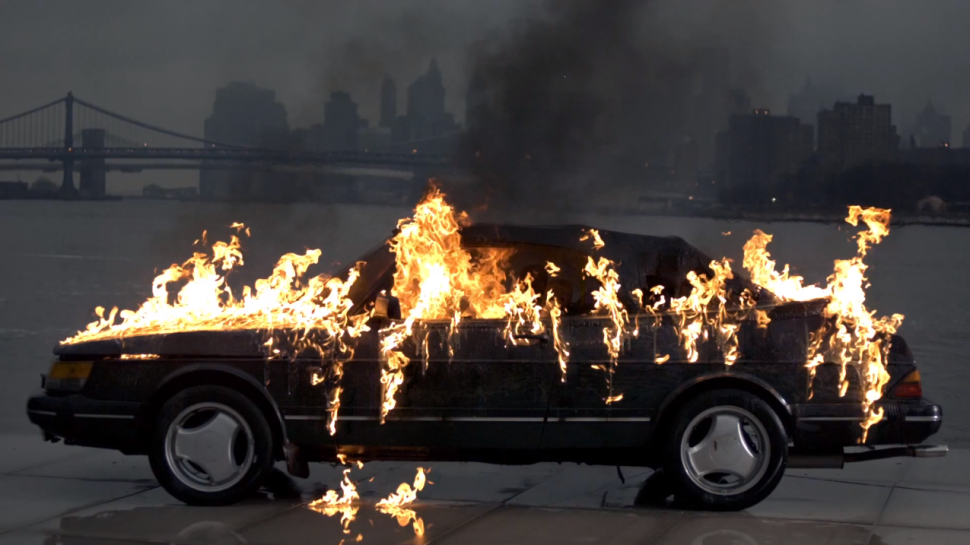