A source close to Democratic gubernatorial candidate state Sen. Barbara Buono (D-18) says the senator is likely to select an African-American running mate, a decision she does not have to make until after the primary season.

The source said Buono sees the African-American option as the most viable.

(Note the absence of legislators – aside from one potential lame duck – in acknowledgement of the unlikelihood that a senator or assemblyperson would give up his or her seat in order to run for lieutenant governor).

For a variety of reasons, Rice (pictured) fits the bill as Buono’s first choice. They have a friendship going back several years now, and a comfort level with each other. Rice was looking very closely at running for mayor of Newark in 2014 and topped a poll of potential candidates but stood down after screening before a group of African-American elders who selected South Ward Councilman Ras Baraka as their candidate. He ran a celebrated losing race for Congress in the 10th District, beating veteran state Sen. Nia Gill (D-34) as the pair battled off the line against eventual winner U.S. Rep. Donald Payne, Jr. (D-10). Rice has strong credentials in the suburban progressive community as well as strong name ID in urban Newark. A six-year veteran of the rough and tumble world of Newark City Council meetings, he has shown a willingness to scrap when necessary. Often buzzed about as a 2014 county executive candidate, Rice putting forward a credible 2013 crusade for LG could give him just the platform he needs to take on Joe D.

He doesn’t want the job. He’s focused exclusively on beating state Sen. Nia Gill (D-34) in the Democratic Primary. But area power players – Passaic County Democratic Chairman John Currie chief among them – have tried to convince him he should pursue the LG position on a Buono ticket in the name of district-wide peace. The Senate candidate has repeatedly said he’s not interested, but if he were to run and lose against Gill – and yet look good in the loss – would Buono consider recruiting the classy law professor who led a statewide network in the 2008 presidential primary?

Essex sources say Gill is all but assured the party line in LD 34 and remains the favorite in her Democratic Primary battle with Alexander (above). But if Gill were to lose a tightly contested race and go down honorably on the barricade, she might find herself politically homeless – and in the LG mix. It’s unlikely. Gill radiates next to no second banana vibes and notoriously doesn’t build lasting alliances. On the plus side, Gill is one of the best inquisitors in the state, an expert cross-examiner who could be just the kind of outraged interlocutor Buono needs to play the part of Democratic Party ticket attack dog.

He and Buono have a genuine friendship going back a few years to when Holley was still council president and battling incumbent Mayor Garrett Smith. Brother of former New England Patriot/Dallas Cowboy Jesse Holley, the mayor of Roselle is the only candidate on the list who is an elected executive. His biggest drawback is the fact that he governs a small town, which probably doesn’t rise to the stature required.

The former New York Giant is said to be interested in politics, and came close to running against U.S. Rep. Scott Garrett (R-5) in 2012. A resident of Franklin Lakes, Carson would have pull in battleground Bergen County. The downside is he’s never held elected office.

Unlike other South Jersey brand names en route to re-election battles this year, Redd wouldn’t have to give up anything to run – except the security she enjoys now that she has a good relationship with Gov. Chris Christie – and that is substantial. Consequently an unlikely candidate for LG, Redd would offer the virtues of being a South Jerseyan with solid ties to the Democratic machine down there as well as executive experience. 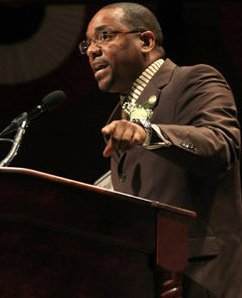