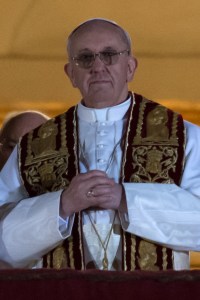 Not that you’d expect a pope to be open-minded, but in case you were curious: the new pope, Francis I, doesn’t much care for art.

In 2004, Cardinal Jorge Bergoglio, now Pope Francis I, denounced a show in Buenos Aires by the Argentinian artist León Ferrari, deeming it “blasphemous.”

To side with the pope for a second here, it was a bit. According to a report, the show “depicted images of Catholic saints, Jesus Christ and the Virgin Mary in a blender, an electric toaster and a frying pan, among other unconventional settings.”

“For some time public expressions of ridicule and insult of our Lord Jesus Christ and the Most Holy Virgin Mary, as well as numerous exhibits against the religious and moral values we profess, have been on display throughout the city,” Cardinal Bergoglio said at the time.

“Jesus warned us that these things would take place, and with much tenderness he told us not to be afraid, that we are his small flock, that we should persevere in the struggle for the faith and in charity, placing our hope in him and praying with the true confidence of children of a Father who loves us,” he added.

He also hates homosexuality and a variety of other reasonable things, of course. It’s all standard for a conservative cardinal, but it’s always nice to know where people stand.

Mr. Ferarri had an exhibition with Mira Schendel at the Museum of Modern Art in 2009. Thanks to New York for pointing us to the original story.