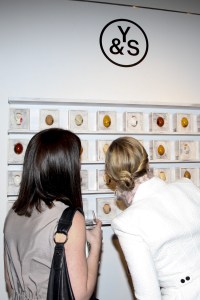 A private viewing of First Open at Christie’s, with a silent auction of works from Y&S. (Courtesy Patrick McMullan)

On Monday night, Christie’s dumped its usually stuffy atmosphere and channeled the vibe of a downtown opening as hepcats crowded the halls to celebrate a silent auction for Young & Starving, an new nonprofit that aims to help up-and-coming artists. There was something of a bar mitzvah about it, too, as walls of pretzels mingled amid the art, at their bases bowls of mustard and beard-stickying caramel.
No, it wasn’t your usual Christie’s event.

“Please!” said Saara Pritchard, head of the First Open sale, who’d invited Y&S to Rockefeller Center. “All those other events are 6 to 8. This one is 7 to 9.”

Y&S was founded by Dylan Brant (a Brant brother, but not a Brant Brother) and Vivian Brodie, who met while interning at Gagosian. Their board features a writer, artists, another Gagosianite and a guy who works at Goldman Sachs, all of whom went through their iPhone contacts to find art that they thought deserved an audience at Christie’s, which had generously waived all premiums on sales for the evening. All the proceeds on works sold went directly to the artists.

There were mixed-media sculptures, works on canvas, even a canvas that had been 3D printed. Y&Sers stood by them to point out good things about the works and take bids on iPad minis. Works from the First Open sale, which traditionally offers modest works by big names, could be glimpsed in just the next room.

“I mean right over there you’ve got Marcel Dzama, Nan Goldin, George Condo, Gerhard Richter, Yayoi Kusama,” said the Y&S auction artist Sam Stabler, mugging slightly. “What am I doing here?” (What he was doing there: he used to handle art at Gagosian and is a friend of Max Teicher, who still works there and is on the Y&S board.)

Everyone seemed to linger at a series that consisted of whole eggshells filled with pepper, stained and fitted into boxes. The artist who made the sculptures, Adam Payne, was telling an attendee that the project actually started when he heard a knock at the door of his apartment in Brooklyn and made the prototype egg to protect himself, thinking he could throw it at an intruder to blind him. So was the project about gentrification?

“Welllllll,” Mr. Payne said. “The thing is, I live near Pratt, and you’ve got all types of people there, Hasids, whatever. And they never mix. So it could have been anyone coming through that door. Luckily it was just the wind.” His own anxiety wasn’t part of the piece.

So who was starving?

“I have $1.37 in my bank account right now,” said filmmaker Charles Berthoud, smoking out front. He declined to bum to a guy in Velcro sneakers because the pack had to last him a week.

Peter Brant, Tony Shafrazi and Stephanie Seymour turned up around 8, and the younger Mr. Brant took them around the room. In all, the evening brought in $45,000, an impressive sum, given that some of the pieces were only expected to sell for $300 and that the show only consisted of 17 works, according to the catalog, which was a zine.

When it was all over, Y&S committee member Tom Lee glanced at an iPad mini. “Your dad got the crowbar piece and the matchbox piece,” he told Dylan Brant.

“That’s good,” Mr. Brant said. “He was really aggressive on those.” Then he turned to me. “We’re about creating a community of young patrons and artists. We’re a board of young people ourselves. We don’t all come from art, and some of us are artists, some of us, like Tom here, are writers, and we know how hard it is to get started in the city.”

I found the oldest guy there, the academic and writer Gil Sewall, and asked if he’d ever been young and starving.

“Let’s be honest,” Mr. Sewall said. “‘Young and starving’ is kind of figurative in this case. These people, they’re at Christie’s. Not some gallery in Toledo.”