BAYONNE – The New Jersey Environmental Federation gambled in 2009 when it decided to back Republican candidate Chris Christie over incumbent Gov. Jon Corzine.

Today, a day after Earth Day, the group claimed it made a mistake, and issued an endorsement of state Sen. Barbara Buono (D-18), the presumptive Democratic nominee for governor.

“Gov. Christie believes the economy and the environment are mutually exclusive,” said Dave Pringle, leader of the NJ Environmental Federation, who vowed to lead a door-pounding effort on behalf of the challenger.

Standing in front of Bayonne High School with Buono, Bayonne Mayor Mark Smith and Assemblyman Jason O’Donnell (D-31), the federation presented a raft of beefs with the Christie administration.

The governor, they said, pledged to do better than the 2007 Global Warming Response Act, which Buono sponsored.

“In actuality, Christie has not only not implemented the provisions of the act and corresponding energy master plan, he has reversed their course,” said Federation Board Member Ben Forest. “He set lower clean energy goals, advocates for more dirty power and waivered on man’s contribution to climate change.”

He pulled out of the Regional Greenhouse Gas Initiative and generally pointed New Jersey away from policies benefiting the environment, Forest added.

Pringle cited other disappointments, pointing out that in 2009 Christie opposed any attept to drill off the coast of New Jersey then vetoed the offshore Liquid Natural Gass (LNG) project; and criticized then-Governor Corzine for delaying the required review of a water master plan, but himself failed to update the plan.

An original member of Christie’s Red Tape Commission, Buono criticized the LG Kim Guadagno-led exericise to weaken environmental safeguards, in her opinion. When she made known her objections, the senator said Christie removed her from the commission and declared unanimous the support of the other members.

“How’s that for transparency?” Buono wondered.

Kevin Roberts, spokesman for the governor, disputed the federation’s and Buono’s accounting of the record.

“The Governor has a strong and undeniable record of taking action to protect New Jersey’s environment, now and for future generations,” Roberts said. “RGGI was a costly program that hurt our businesses and our competitiveness and that was not effective in the first place.  The Governor has put in place policies that are actually effective in moving towards cleaner and sustainable energy production for the state – including a huge emphasis and extraordinary record of promoting natural gas, solar, and wind sources. Meanwhile, Barbara Buono talks a big game about one-shot revenue sources, when the Corzine-Buono budget of FY 2010 relied on a massive 13% in one-shot revenues.  We’ve lowered that number to 3%.”

But the federation said it was very pleased with Buono’s portfolio, calling her “the best steward” to advance environmental protection while growing the economy.

Pringle called Buono a leader in the Clean Water Now campaign that defeated efforts in the 1990s to roll back key environmental and public health protections; a champion of the 2002 School Integrated Pest Management Act, which reduced exposure of school children to deadly pesticides; and a leader in attempting to override the governor’s DEP waiver rule that Pringle said would undermine dozens of environmental laws.

Christie was proud too, from afar.

“In July, 2012, Governor Christie signed bipartisan legislation to strengthen and encourage the continued growth of New Jersey’s solar industry, while protecting ratepayers from increased costs,” Roberts said. “The law couples an acceleration of the renewable portfolio standard (RPS) for solar energy with a reduction of the solar alternate compliance payments, meeting an important goal of the Governor’s 2011 Energy Master Plan (EMP), strengthening the solar market in New Jersey, and securing the state’s place as a national solar energy leader.” 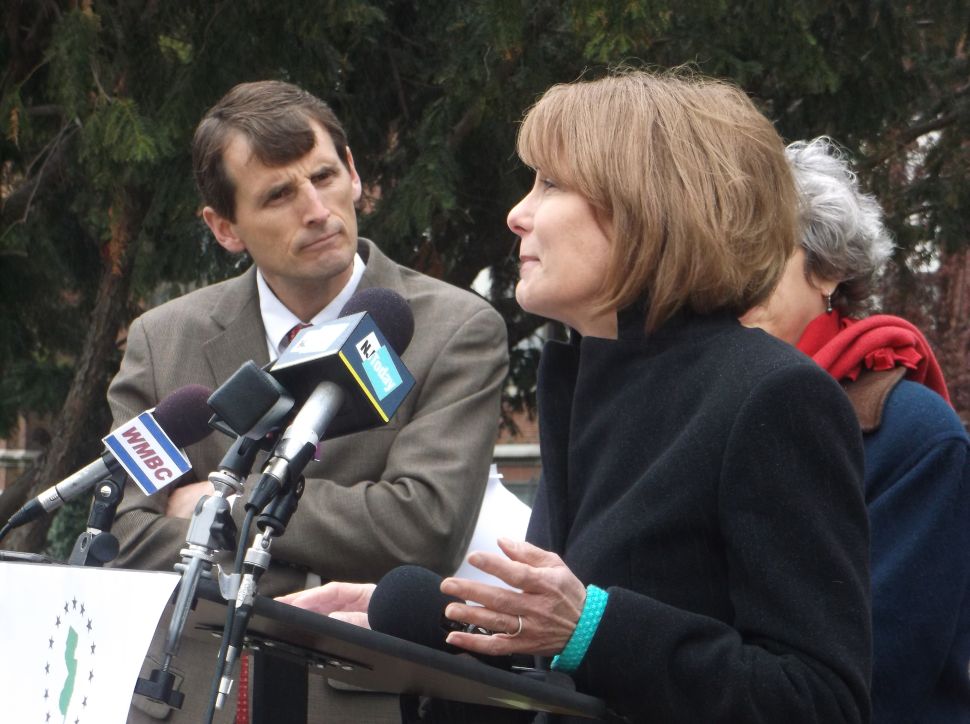