The campaign of Mark Alexander is calling out Essex County Executive Joe DiVincenzo.

After learning that DiVincenzo is slated to co-chair an April 17 fundraiser for Alexander’s opponent, Sen. Nia H. Gill in Montclair, the challenger went on offense.

“Today, our campaign is calling on Senator Gill to ask the Essex County Executive to step down as a Co-Chair of a fundraiser raising money for her campaign for the NJ State Senate,” Alexander Campaign Manager Gregory Joseph said. “It has been widely reported that the County Executive is not going to support the Democratic nominee in this year’s gubernatorial election, and will instead support Governor Chris Christie.

“As a Democrat, Senator Gill should immediately distance herself and her campaign from the County Executive until he vows to support the Democratic nominee. It is unconscionable given Governor Christie’s outright hostility to progressive Democratic ideals in the areas of public education, the minimum wage, property taxes and his attack on public employees that Senator Gill would stand with any leaders of the Democratic Party supporting Governor Christie. With Senator Gill already receiving a $50,000 no-bid legal contract from the DiVincenzo-controlled Essex County Improvement Authority, one must question whether Senator Gill can provide the independent leadership the people of the 34th District deserve. We need independent leadership in Trenton, not legislators controlled by power brokers and special interest groups.”

Phil Alagia, chief of staff of DiVIncenzo’s, responded to the Alexander campaign.

“Joe is honored to stand with Senator Gill and the other Essex Democrats running,” Alagia said. “She’s been the champion for progressive values in Montclair. It’s funny that Mark Alexander has decided to show his support for Barbara Buono by running with her opponent.”

East Orange Mayor Bob Bowser’s chief of staff, Troy Webster, is running for governor on the mayor’s Democratic Primary slate, and is Buono’s only primary opponent.

“We haven’t made any endorsements for governor,” Alagia said. “We’re focused on government.” 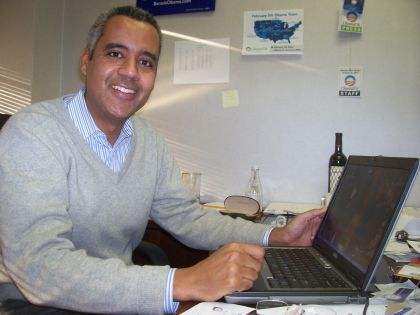