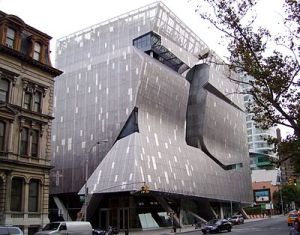 The email heralding the announcement that the Cooper Union will soon charge tuition for the first time since its founding in 1859 went out to the student body at 8:31 a.m., summoning all students to a noon announcement in the school’s Great Hall. No press was admitted. By 12:09 it was all over; new students whom the school determines can afford to pay will have an annual bill of around $20,000 beginning next fall, according to The Times, while others will pay on a sliding scale.

Most of the crowd stayed in the auditorium for a Q&A session with Board of Trustees Chairman Mark Epstein; later, after they exited, a protest would coalesce outside the building. But many had heard enough and left right after the tuition announcement. The idea that the school, badly in debt, might make such a decision has been circulating for years.

At 12:11 a fifth-year architecture student, who declined to be named, stepped outside and glanced at the twisting $166 million engineering building across the street at 41 Cooper Square (completed in 2009). He looked like he wanted to punch it.

“This marks the end of a 150-year mission,” he said, “and they said goodbye to it on a Tuesday morning in a classless and unprofessional address to the student body with just a few hours’ notice. To say I’m disappointed may be a bit of understatement.”

Asked for her thoughts, another architecture student took a drag on her cigarette. While she inhaled, another woman ran out of the Foundation Building, yelling, “I feel like I’m gonna cry!”

“Yeah, that’s pretty much it,” said the architecture student, through smoke.

The Cooper Union offers courses in architecture, engineering and art. Sculpture professor Niki Logis thinks the decision will hit her department especially hard, since it’s “a form of study historically associated with the rich.”

“What am I supposed to say to a class where half of the students are paying tuition?” she said. “Never mind that I can never crack a joke again. I defy you to come up with a joke that would work for a group of people like that.”

Ariel and James, both fourth-year art students, leaned against the stone sill of the Foundation Building.

“It’s fucked up,” said Ariel, who is from New Orleans. “We were just saying that minority students and low-income students are going to be the first ones to feel this. It’s going to change the whole atmosphere. The important thing about this place was that everybody was the same. When the rich kids bring in projects that are better because they can afford to have them be, what are the rest of us supposed to do?”

James added that the decision didn’t even make sense on a practical level, because when it comes to resources, the school doesn’t necessarily compete with other tuition-charging schools in the city, like NYU.

“The reason this school holds such prestige is that it is, to paraphrase Peter Cooper, as free as air and water,” he said. “Can I play you a song?”

He thumbed though his iPhone to queue up a song and go to Rap Genius as he continued.

“Doubt is predicated on hope,” he said, “It’s all based on hope, though. This institution itself is based on hope; that’s what all philanthropy is about.

“And so,” he said, “in the immortal words of Rick Ross.” He pressed play and danced with his shoulders as he sang along:

Ariel laughed. “My grandma, who’s creole, she straight up called a white man a nigga the other day,” she said. “Everybody said, ‘What are you talking about? He’s white.’ She said that doesn’t matter. A nigga is a low-down person who’s willing to do whatever it takes and keeps people down.”

Nobody said anything for a moment.

Update, 8:05 p.m.: An earlier version of this post incorrectly identified the Cooper Union official leading the Q&A session. The post has also been updated to clarify the school’s tuition plans.