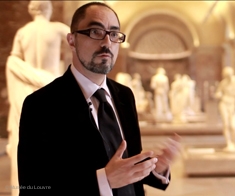 The new director. (Courtesy the Louvre)

French President François Hollande has tapped the head of the Louvre’s department of Greek, Etruscan and Roman antiquities, Jean-Luc Martinez, who is trained as an archaeologist, to be the museum’s new director. The New York Times has the news. On April 15 Mr. Martinez will replace Henri Loyrette, who has held the post since 2001.

France’s culture minister, Aurélie Filippetti, in a statement, praised Mr. Martinez as “a great curator who throughout his career has been motivated by a desire to share with the public his passion for art and the fruits of his erudition.”

Ms. Filippetti had actually been rooting for Sylvie Ramond, the director of the Musée des Beaux Arts in Lyon, France, to be selected. Ms. Ramond would have been the first woman to hold the position. From The Times:

Some critics felt that Ms. Ramond’s credentials fell short of what was necessary for managing the museum and curating its large catalog. Others argued that Ms. Filippetti was championing a woman for the post solely on the grounds of equality.

Also in the running was Laurent Le Bon, the head of the Centre Pompidou-Metz, but some critics were not in love with the idea of having a modern and contemporary art specialist in the top slot, likening the move to putting “an installation by Jeff Koons opposite the Mona Lisa.” Wouldn’t want that.