There was mild GOTV confidence among the players close to the mayor juggling heaping platefuls of food  as the fire roared like an Elvin-styled set piece wheeled off a Lord of the Rings soundstage.

An announcement was made in advance without apology: there wouldn’t be any policy speeches.

“I need everyone on this team to come in with me,” Healy said. “If you’re here tonight you’re helping out with the financing. We need people to drive people to the polls. We feel very good about the victory. I can sense it when I’m going out in the streets.”

Amid the latest pro-Fulop influx of ads launched by BK4, a schools reform outfit headed by hedgefund billionaire David Tepper, Councilwoman Viola RIchrdson warned of the consequences of a Fulop victory.

“Your schools are going to be privatized,” she said. “There will be a whole Republican existence here.”

Healy worked the room among old-timers and new faces alike while the DJ played bubblegum standards from the 1960s, heavy on Del Shannon. You half expected to see Cousin Brucie nursing a beer at the bar.

At the Casino bar, Council President Peter Brennan told PolitickerNJ.com he believes Fulop is going down on Election Day.

“I’ve been on the council since 2001,” said the veteran. “Steve Fulop got on in 2005 and immediately started running for mayor. I told him, ‘You got to learn how to be a councilman first,’ but he didn’t listen. He wants to run for Congress, he wants to be senator, and now it looks like he’s going to lose the mayor’s race. How can he be congressman if he loses this?”

Brennan said he’s seen it before.

“These guys wanted to go places,” Brennan said. “I think Steve Fulop is in that group.”

In and among the revelers stood Assemblyman Sean Kean (R-30).

“A friend of the mayor’s,” said the Irish Riviera brand name, explaining his presence here.

“My advice is let’s finish it off in two weeks.” DeGise said. “There are always ebbs and flows. All campaigns are trying to get their guy to peak as you’re approaching Election Day. I don’t think there is a person out there who doesn’t sense that the momentum is going toward the Healy Team.”

Claps showered the Jersey City Heights resident who once lost his own bid for mayor.

A few blocks away, Team Fulop continued to lick envelopes on their latest round of mail with field operative Tommy Bertoli keeping watch. 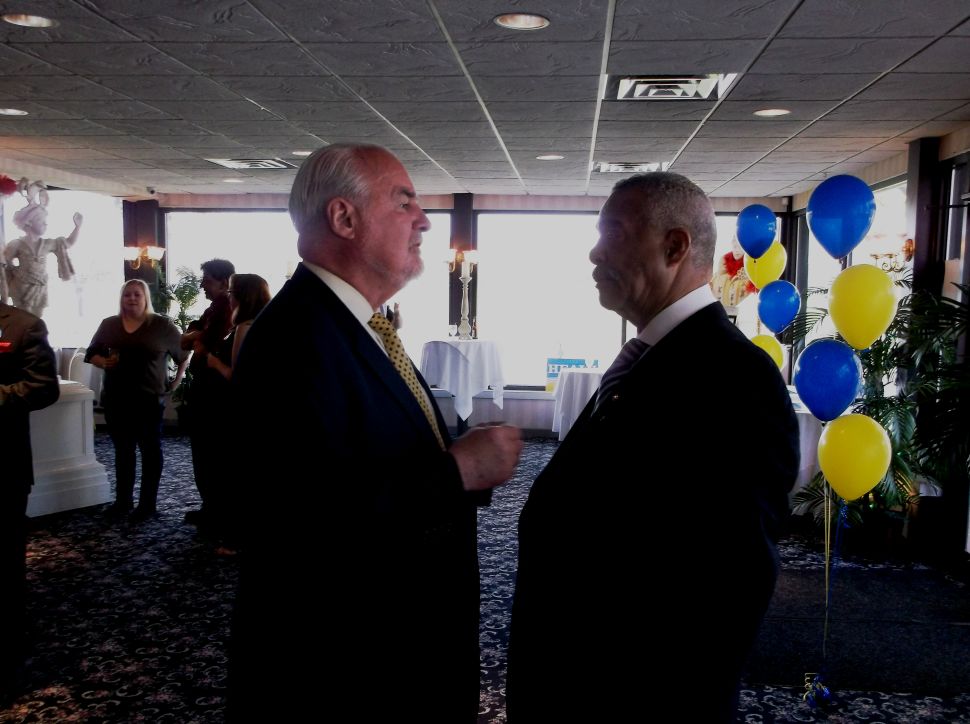