NEW BRUNSWICK – Naysayers joked in the lead-up that the event would prove an onslaught of anemia, but the State Democratic Committee’s annual Jefferson-Jackson Dinner tonight tried to prop up a party with a pulse as it wades into a contest with Republican Gov. Chris Christie.

Challenging Christie even as better-known leaders ducked him, Democratic Gubernatorial candidate Barbara Buono received a big, hearty, sustained round of applause and standing ovation from the crowd in her home county of Middlesex.

“I’ll let you in on a secret,” said State Party Chairman John Wisniewski. “She is tougher than just about any man in this room. …She’s in this race to win it. She’s going to win it with your help.”

Buono bashed Christie as a blustering right-wing blunderbuss trying to use New Jersey as a springboard to the White House.

“It’s time to stand up and fight for the middle class,” declared Buono, panning the sitting governor’s overhaul of public pension and benefits, an applause line that caused some shoulders to shrink over their salads.

Christie got that measure done with key party support.

“We cannot afford another four years of Chris Christie and his fantasy revenue projections and right-wing trickle down policies,” Buono said.

He doesn’t support marriage equality and believes creating a commission to study violence sufficiently arms the public against guns, the gubernatorial candidate added.

“Simply because he knows it polls well in the cornfields of Iowa,” she said.

Below is the full text of Buono’s remarks tonight…

“Tonight, we come together for an annual tradition that brings our party together and where we get to see old friends.

We are here to celebrate our party and prepare for the work to be done in this election.

I am proud to say that we are joined tonight by Governor Ted Strickland, someone who knows first-hand the importance of standing up for the things in which we all believe, the work required to get it done and the value of the fight.

After leaving office, Governor Strickland helped spearhead one of the most important fights our country has seen in decades.

Governor Strickland stood up and fought against Senate Bill 5, one of the most anti-worker, anti-union, anti-middle class pieces of legislation to come down the pike.

Nothing less than a broadside attack on Ohio’s middle and working class, this bill was a dagger in the heart of collective bargaining aimed at firefighters, police, teachers and public workers all throughout the state, happily signed into law by Ohio’s Chris Christie, John Kasich.

Losing one battle didn’t weaken the resolve of Governor Strickland and others across Ohio.  It strengthened their resolve and they would not let this stand.

Faced with overwhelming odds, they fought back.

Its time New Jersey.  Time for New Jersey to stand up.  Because that’s who we are.

I am proud to stand before you as our party’s nominee in this fight to take back New Jersey for our kids, our seniors, our middle class and our working poor.

We can’t survive another four years of Chris Christie denying people the right to marry while also denying the need for tighter gun safety measures, strictly because he knows how it would poll in the cornfields of Iowa.

New Jersey needs more than right wing policies crafted with an eye on 2016, we need more than YouTube videos and stage shows with rotating slogans.

We need a leader!  We need someone who doesn’t mistake red-faced bluster and finger pointing antics for sound decision making, and we need someone who actually respects New Jersey residents enough to tell them the truth . . .

We are not better off than we were three and a half years ago, and Chris Christie’s policies are not working.

Compared to last year, more people are out of work, and those with jobs are earning less.

And yet this Governor calls it “solid growth” . . . I call it unacceptable.

The Governor ignored the warnings of one of the nation’s leading credit agencies– Standard and Poor’s – and once again drafted an irresponsible budget balanced largely based on fantasy revenue predictions. We have seen this before and now our seniors must wait for property tax relief.

He called this a balanced approach.  I say that it’s gimmicks and tricks.

After three and a half years, we cannot – we should not – settle for this kind of mediocrity.

New Jerseyans have never accepted diminished expectations. We are better than that.

The time of choosing millionaires over our middle class is over.

The time for showmanship over substance is over.

The time where you are demonized for the work that you do, for the person that you love or for having the audacity to question the decisions of your elected leader because you care about your state is over.

We can look to Washington to get us back on track, but I know that the heart of this economy is on George Street, and in the Ironbound, and on the boardwalk of Belmar.

If we expect to see economic growth and job creation, if we expect to stand by the all-American notion of entrepreneurship in New Jersey, we have to start with small businesses. As governor I will make sure they get the help they need.

And as Governor, I will invest in education because our state should be one where every child – in Newark and in Nutley, in Trenton and in Cape May – gets the right to a quality education.

Our college students are some of the best and brightest but, even if they make straight A’s, they come out with the three D’s: a degree, debt, and disappointment. And if we want to be the state we once were, the state we can be again, this must change.

Because were it not for grants and loans and affordable tuition rates at Montclair State University and Rutgers Law School, I wouldn’t be here.

I put myself through college and law school here in NJ by working part-time jobs to make ends meet.  But I know that without my dad’s (who died when I was 19) without his veterans’ benefits, Social Security death benefits and a National Defense Student Loan, I wouldn’t be here.

Luckily, someone thought it was important to invest in making sure a kid like me could succeed.

That means we honor and protect our seniors – the men and women who have inspired us by their hard work, their values, and their legacies of paving a path for us.

That means we look out for a child who came to our state undocumented but seeks the opportunity to better themselves and our society.

That means we make sure to acknowledge the required actions to combat climate change and protect against future Sandy’s that our children will inherit.

And we don’t insult the intelligence of the taxpayers by pretending that a no-bid contract that helps Haley Barbour but hurts New Jersey taxpayers will go unnoticed.

But at its core, this campaign isn’t about Chris Christie.

It isn’t about his broken promises to our state’s teachers, police, and fire— or his bait and switch campaign perpetrated on our seniors by promising to restore property tax rebates to their previous levels his first year in office.

Because, you see, I’m not running against him.  I’m running for the people of New Jersey.

I’m running for thousands of families who are struggling to pay their rent and keep their homes; who want a governor who will support a minimum wage increase linked to the cost-of-living.

I’m running for all the parents who hold their breath when they send their children off to school concerned about gun violence…for whom empty pledges of “studying the issue of violence” are nothing more than a painful rebuke.

I’m running for everyone in this state who, because of what they earn or where they live, has been told over and over again for the last three and a half years that they don’t belong.

—New Jerseyans that have been denied the right to marry the one they love only because they are of the same gender.

—Women that have been left with less choices for health care because of his right wing ideology.

I’m running because in every one of them, I see a little bit of me.

I’m here to stand up for our middle class and our working poor, for our students, for our homeowners and our seniors and everyone who, for the last three and half years, has been told to wait for the help they need….to wait until the Governor satisfies his own political ambitions.

Well, I’m here to say that this is our time.  We will not wait.

And as we stand together, as we organize together and put our faith in the belief that in New Jersey equal opportunity for all of us isn’t an ideal we aspire to but a reality that we will fight to maintain, this November, we will win this race and restore the hope and promise to New Jersey.” 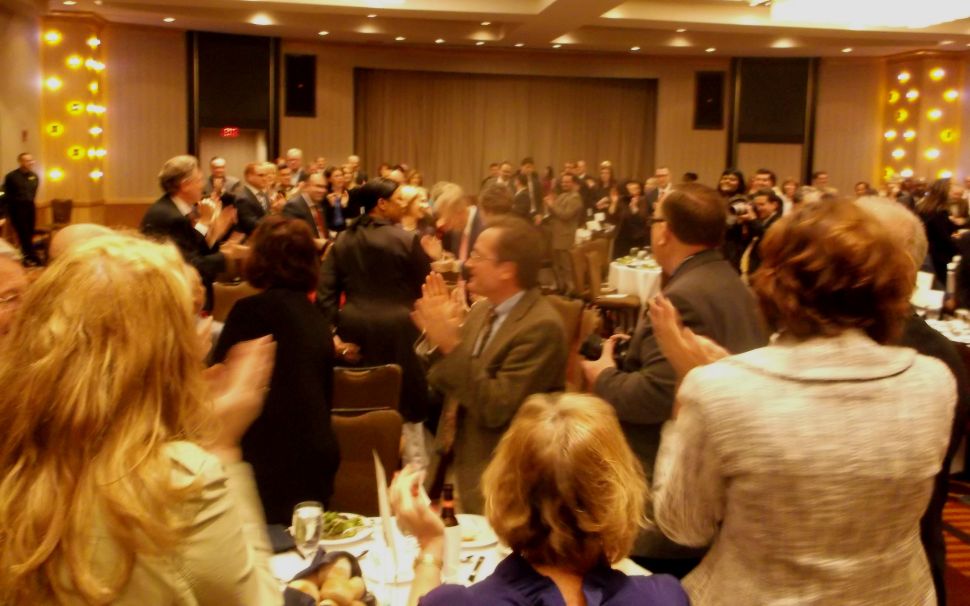