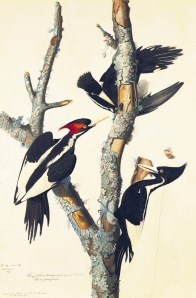 Just as people-watching can feel like a zoological activity, it’s impossible not to extrapolate human traits from John James Audubon’s gorgeous watercolors of birds.

In this exhibition, curated by Roberta J.M. Olson, the first in a three-part series displaying the museum’s Audubon holdings, there are nesting barn swallows, an impassive barn owl holding a dead chipmunk, a red-eyed vireo craning his neck for a tiny spider. There’s a crow in a honey locust tree eating a tiny crab, cuckoos in magnolia trees, more crows in a black walnut, pretty groups of yellow-breasted chat moles, an elegant Cooper’s hawk attacking a rabbit, two peregrine falcons tearing apart wood ducks, a fish hawk clutching a shiny trout. There are a chestnut-sided warbler and red-tailed hawks. These nearly life-size depictions of birds are hung salon-style. In their flocks and clusters, they take up every inch of exhibition space. Birdsong plays in the galleries, and the audio guide features the calls associated with each species. There are some 175 different species of birds to see here—a third of what Audubon illustrated for his massive tome, The Birds of America (1827-38).

Audubon’s birds don’t just sit there. While early studies in pastel and graphite show his sensitivity to the feel of articulated feathers and the soft slump of a carcass, Audubon had a flair for drama. Although at first his specimens were depicted strung from one foot by string, his taste was for the living bird. An early pastel study of a hoopoe from 1806 shows the crested creature seemingly surprised by a tiny fly caught in its beak. He soon imagines pileated woodpeckers preening on fox grape, a viper attacking a nest of valiant brown thrashers and black vultures picking at the eyes of a dead deer. He collaborated with friends, and later his sons, on the meticulous execution of plants, flowers and insects, all of which enhanced his backdrops and made his posed creatures look increasingly lifelike.

Audubon’s Americanness was as self-invented as his artistic project. Born Jean-Jacques to a French father and a Creole mother, he was Haitian by birth, and he and his sister were raised near Nantes, in France. His father intended to make him a sailor, but Audubon was bad at math and prone to seasickness. He changed his name to the Anglicized John James in 1803 when he made a fake U.S. passport and moved to this country to escape being drafted into the Napoleonic wars. Other ironies abound: the naturalist lived most of his life in Manhattan—albeit the rural predecessor of the Upper West Side circa 1840. He made most of his renderings from dead birds pinned to wooden boards, impaled on wires against gridded backdrops to create what he called the G.I.S.S. (“General Impression of Size and Shape”). Early proofs show his meticulous corrections to the colors of the printing and watercolor processes for the production of The Birds of America, and magnifying glasses help viewers zoom in on the last pinfeather.

Audubon became a celebrity; by the 1830s, his fame was worldwide. (If his rendering of a blue-winged warbler in hibiscus has the feel of a Japanese woodcut, a work on view shows Audubon the artist-explorer himself depicted in an early 19th-century Japanese woodcut—he was big in Japan.) A carte de visite shows him with a Byronic look, not that he was modest about it—“quite a handsome figure” is how he described himself.

But at the heart of Birds of America is, as its title describes, a national spirit. In it he created one of the definitive renderings of this country. These are the birds we most associate with America: the bald eagle, the red cardinal, the robin. They are shown striving for life—reaching for a berry, clutching a rabbit—and are set among plenty, in a beautiful world in which chanterelles spring from the earth, the trees are thick with birds and there’s an abundance of nature at every turn. And yet there are ways in which Audubon’s birds appear to have been seen through a French eye. It’s not just that his great egret of 1821 wears white plumage as handsome as a couture gown, but that his project itself speaks to the French mania for classification. It’s our Comédie Humaine, capturing the variety of our patrimony and implying a profound natural harmony to our social order, with its unique combinations of large, medium and small prints and depictions of birds great and small.

Some species here are now extinct, like the four stunning ivory-billed woodpeckers (1825-6) or the seven great Carolina parakeets. It is partly thanks to Audubon that we know how they looked, nested, mated and ate. Full of faith in observation from life, this long-haired Caribbean immigrant with a forged passport, on the run from revolution and terror, looked closely at what this country had to offer and saw in it both beauty and the makings of an enterprise. (Through May 19, 2013)