MONTCLAIR – Supporting Mark Alexander for the state Senate in LD 34, Bishop Reginald Jackson identified the issue of education as the major contrast point between his candidate and incumbent state Sen. Nia Gill (D-34).

“I’m going to see what the options are on the table,” said Alexander, not ruling out vouchers.

Jackson identified Gill’s dug-in opposition to school vouchers – expressed in her nay vote on the Opportunity Scholarship Act – as the crux of his dissatisfaction.

Rumored to be mulling an endorsement of Gov. Chris Christie, who supports vouchers, Jackson said he has not yet decided on governor.

“I’m endorsing Mark Alexander,” he said. “I’ve met with the governor and Senator Buono. I may not decide to endorse anyone.”

“I’ve been accused of not always being logical,” Jackson cracked. 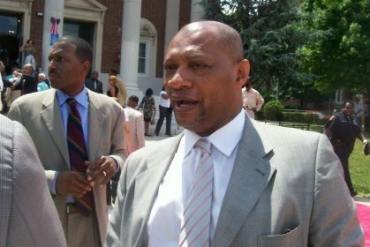