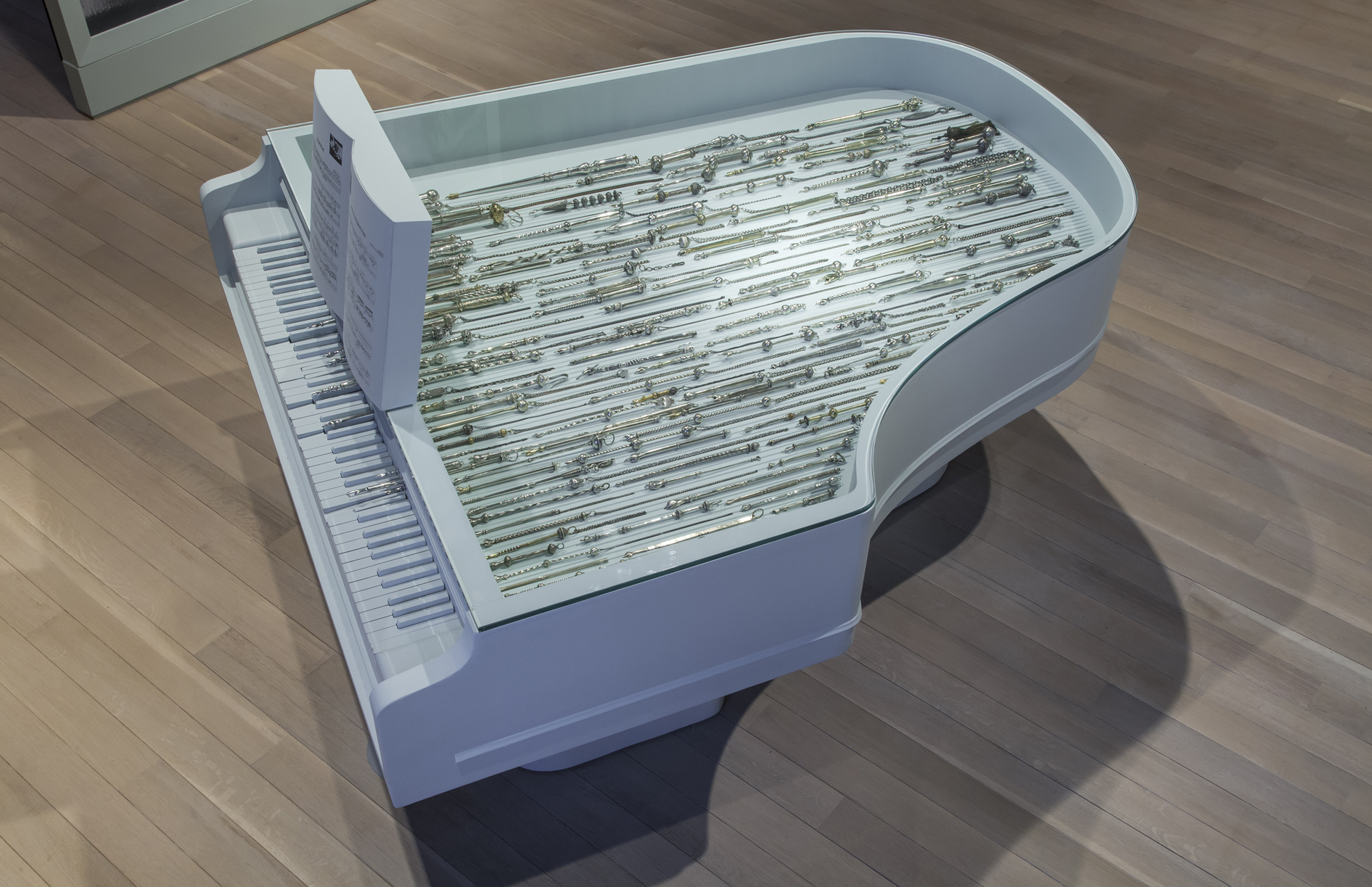 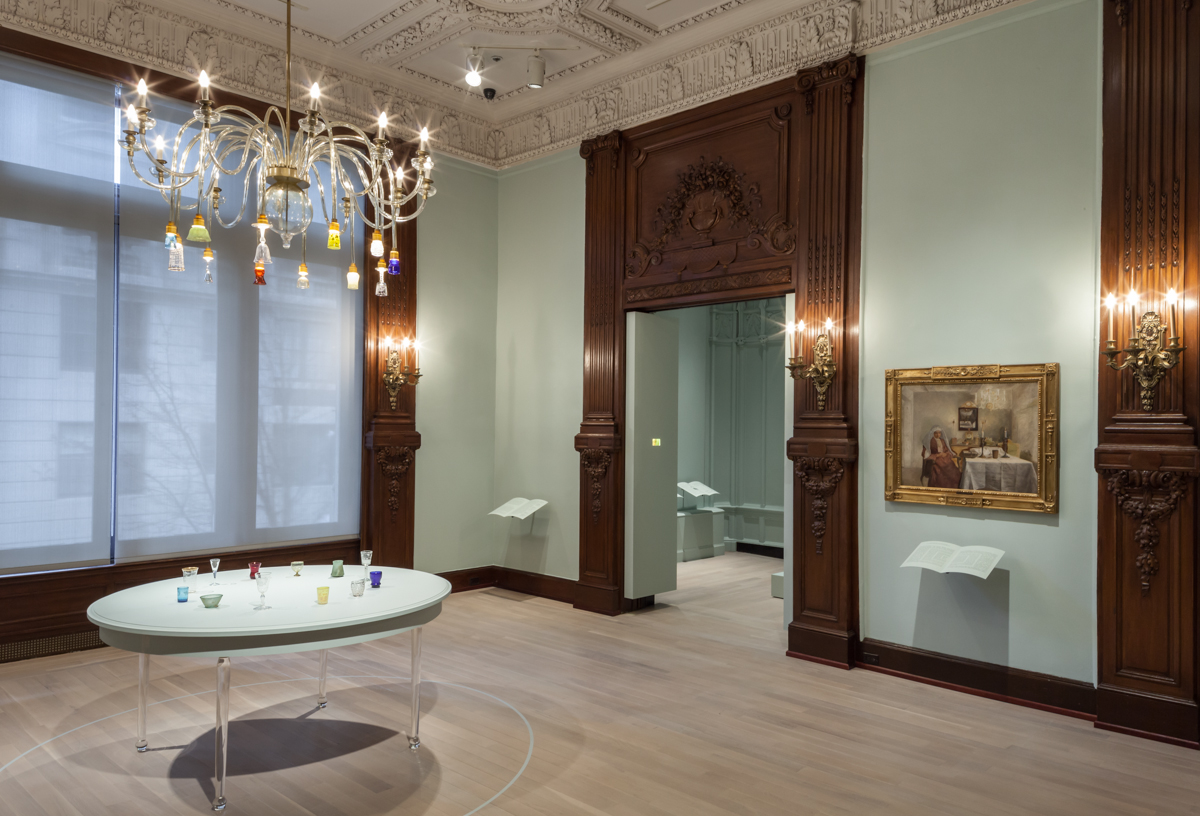 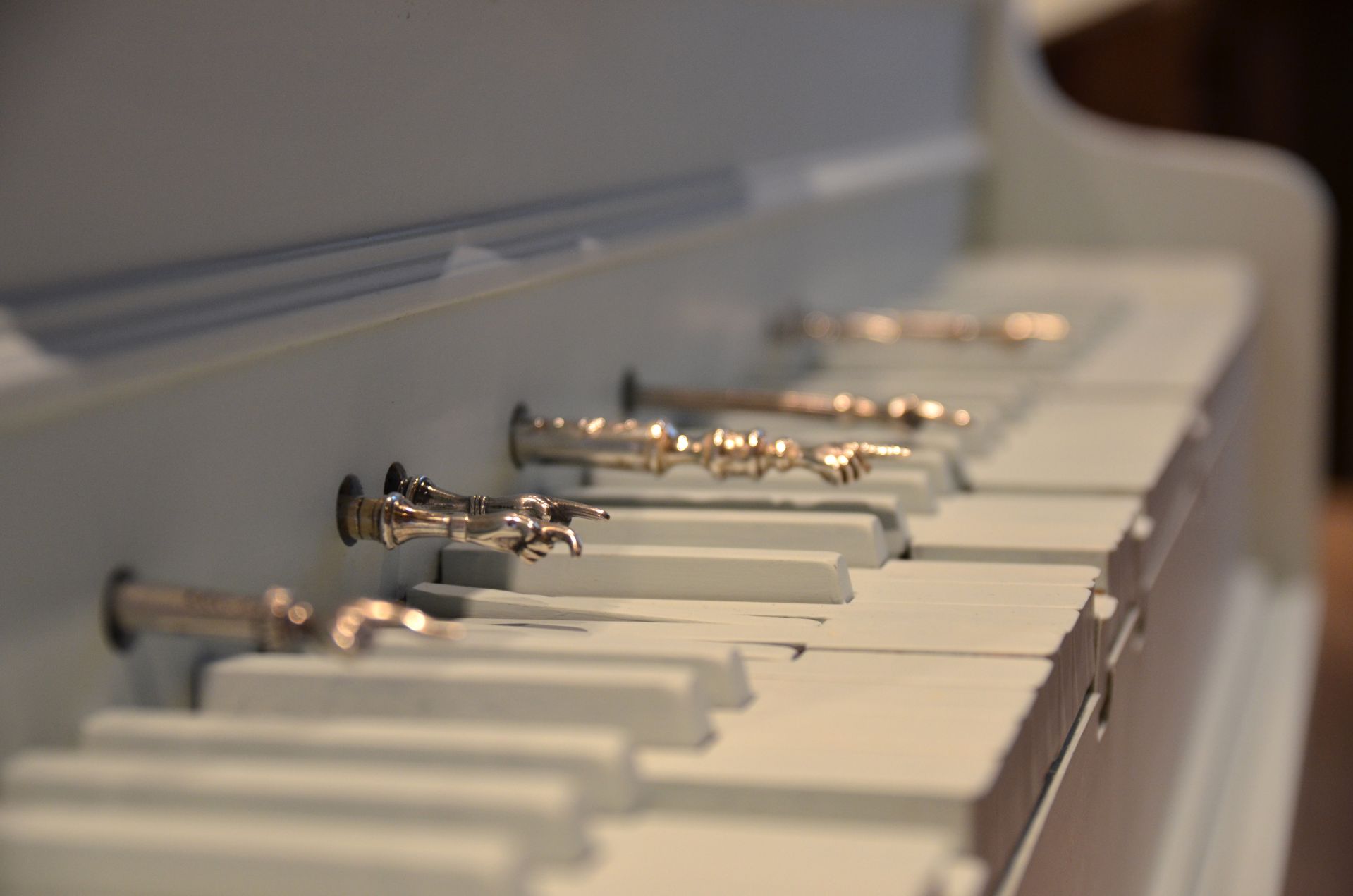 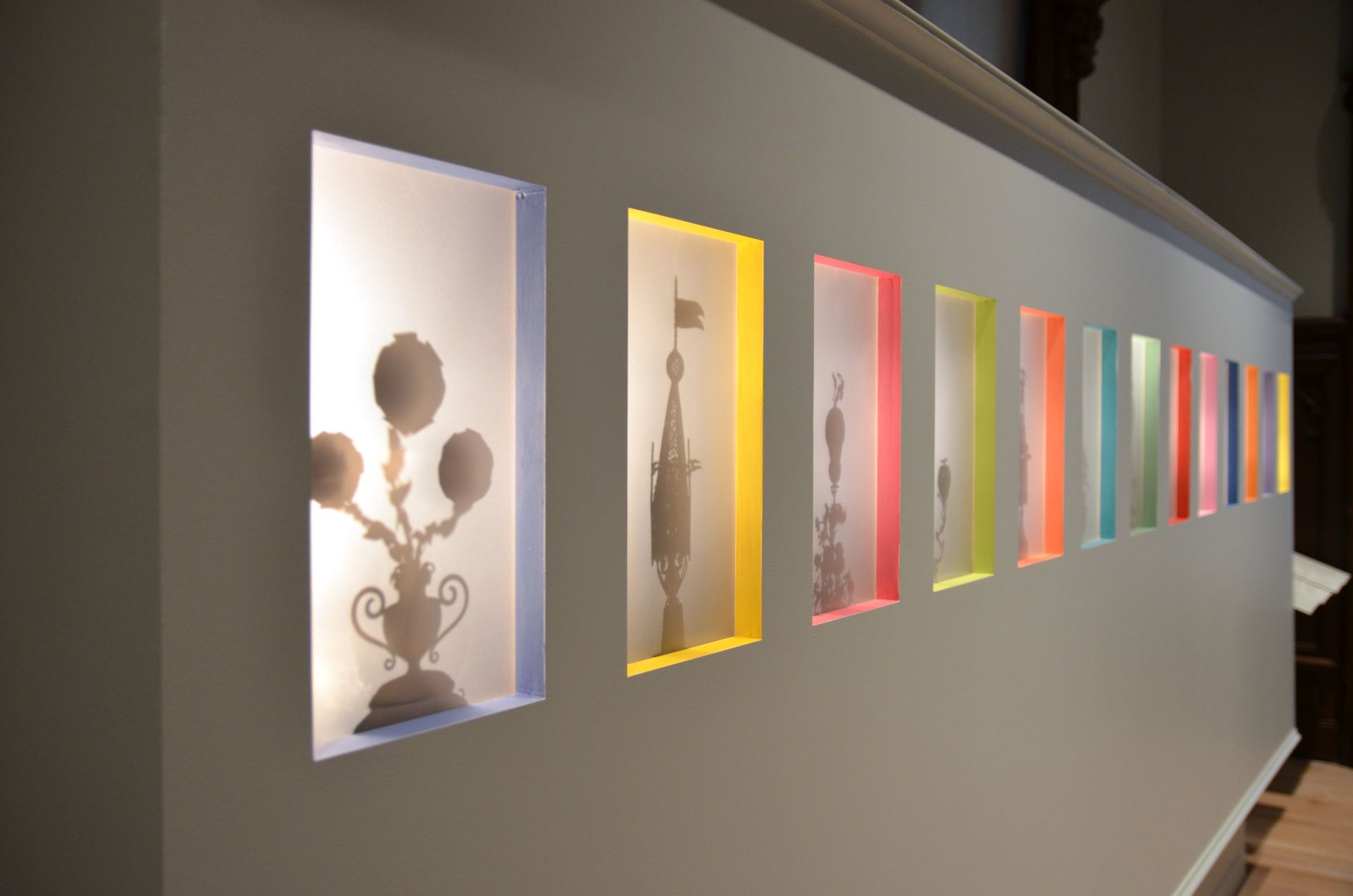 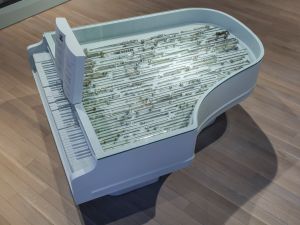 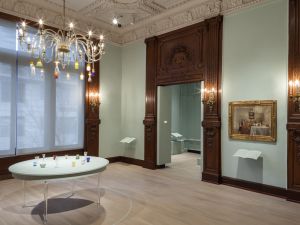 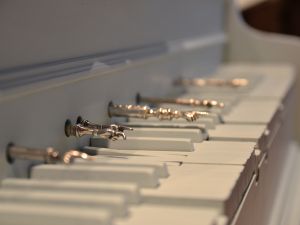 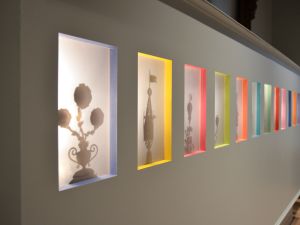 Twelve historical glasses from Bohemia, England, New York and the Netherlands ring a table as if set for a toast. Each comes from a different century: the fifth, the 18th, the 19th, the 21st. These are the kinds of objects Barbara Bloom calls “ambassadors.” By placing them in proximity to one another, she creates dialogues across time and place.

Taking a page from Fred Wilson—and another from W. G. Sebald—Ms. Bloom has selected hundreds of objects from the Jewish Museum’s permanent collection that speak to aspects of Jewish life—cups, ketubahs, amulets, Torah reading pointers—and framed them with quotations from figures as diverse as Leonard Cohen, Lou Andreas-Salomé (the first female psychoanalyst), Zola, Nietzsche, Woody Allen and Sigmund Freud. The installation transforms each arrangement of objects and texts into a conversation around a specific theme: luck, libraries, windows. The effect is an essayistic meditation on Jewish identity.

In one room, marriage and divorce contracts quilt a bed-like support. The marriage contracts are brightly colored and ornamented with peacocks, flowers and tigers. They come from Poland, Iran, Brooklyn, India and Shanghai, and specify the rights of the bride and groom. “The bride comes with a dowry of 2200 pizzi, 1800 in cash, 200 in household objects and jewelry, the rest unspecified,” reads one from Florence dated 1836. They stand in stark contrast to the black-and-white divorce contracts, which are ritually torn as they are filed.

In the next room are 21 lucky amulets. Some are shaped like hands, some like cats; they’re made from coral, bear’s claw, silver, gold and glass. These mysterious objects come from Israel, the Netherlands, North Africa and Italy. Some have specific purposes, like protecting newborn children or warding off the evil eye. The accompanying text meditates on the distinction between a lucky person and just plain luck.

Ms. Bloom did the installation design, framing her objects in a cool toothpaste-green and giving the museum’s Fifth Avenue rooms a Gattaca-like feel. Within it, some marvelous finds—Sigmund Freud’s Roman signet ring (a gift to his daughter) and his cigar box (a gift from a patient), a film of Schoenberg and Gershwin playing tennis in Beverly Hills—are harnessed to tell stories that ultimately say something larger about the diasporic Jewish community.

Objects are not just framed by Ms. Bloom’s installation—just as often, they are partly masked. Doorways encase 18th- and 19th-century paintings from the museum’s collection in structures that leave only cut-out rectangles for the eyes to peek out from. These shrouded portraits seem to watch you as you move from gallery to gallery.

Ms. Bloom’s quotation texts can have a slightly twee “sayings from famous Jews” feel. Its fetishization of smart-sounding things occasionally seems hackneyed, as in one piece that assembles quotations on synaesthesia from Marilyn Monroe, Mozart, Tilda Swinton, Jimi Hendrix and Ludwig Wittgenstein. She is at her best with objects: the elegant shadows of the spice bowls, the shapes of the amulets. She manages to give a voice to things like a collection of silver Torah pointers (tasseled, hollow, chained, with the gleam of a crooked finger) laid out on a piano-shaped table.

Ms. Bloom studied at CalArts and belongs to that generation of artists that includes Louise Lawler, Richard Prince and Sherrie Levine, artists who are known for combining found imagery and text to make art that reflects on contemporary culture. (Indeed, the Jewish Museum is doubling up on so-called Pictures Generation artists with next month’s Jack Goldstein show, the first American retrospective of the artist.) Ms. Bloom is the historian among them. Her real strength lies in creating interventions using extant collections. If you have been to the MAK Museum in Vienna, you will remember her perfect permanent installation featuring the shadowy shapes of backlit Thonet bentwood chairs.

But it’s rare that a museum commission results in new work as nuanced and rich as this collaboration between Ms. Bloom and the Jewish Museum. Discovering Ms. Bloom’s world for the first time is like reading a book by an author with a resonant logic and sensibility. Her assembly of objects gets reabsorbed into the museum when the show is done, and this transitory quality is part of her work’s spectral allure. (Through August 4, 2013)