Birdsall Services Group, the firm at the center of a sweeping pay to play investigation, has been circumventing laws banning campaign donations from contractors for years, according to indictments of nearly a dozen former executives of the firm.

And while the investigation centers on reimbursements the company made in the form of bonuses to employees who donated money to local and state elected officials, the firm also was deeply enmeshed in another systematic circumventing of pay to play laws.

From 2008 through 2012, Birdsall services contributed at least $108,000 to a web of Political Action Committees that operate inside Middlesex County and are reportedly controlled by a Democratic state elected official.

The PACs, which receive millions in donations from vendors that, like Birdsall, have lucrative contracts within the county, in turn donate heavily to elected officials and parties at the state and county level and in townships throughout Middlesex.

The PACs and the donations are legal under state law, however, were the donations contributed from Birdsall and the other vendors directly to the elected officials they would violate pay to play laws at the state, county and local level.  By enlisting the middlemen, Birdsall and others steer clear of any violations.

The arrangement, which Gov. Chris Christie last year called “disturbing,” has been a lucrative one for Birdsall and other vendors.  In 2011, Birdsall brought in more than $1.8 million in revenue from contracts with Middlesex County.  Nearly every county freeholder as well as the county Democratic Party was a heavy beneficiary of the PAC money.

The embattled engineering firm has also been a favorite of Monroe Mayor Richard Pucci, a heavy beneficiary of PAC money.  As chairman of the Middlesex County Improvement Authority, Pucci and the MCIA board  have awarded Birdsall contracts worth $140,000 since 2007.

According to Middlesex County chairman Peter Barnes, the PACs are controlled by State Sen. Bob Smith, while Smith denies that he has anything to do with them.  Last year, Christie took aim at both Smith and Barnes, calling on the two Democrats to answer questions about the PACs.

“I will say, I’m not surprised to see that coming out of Middlesex Democrats. It is generally a corrupt organization,” Christie said after PolitickerNJ first disclosed the web of donations between the PACs and local officials.

In 2011, two of the PACs donated a total of $16,000 to the joint campaign committee of then-state Sen. Barbara Buono and her running mates, Assemblymen Patrick Diegnan and Peter Barnes, the son of the Middlesex Democratic chairman. Buono is the presumptive Democratic gubernatorial nominee and Barnes is running for her seat in the 18th District.

For their part, Birdsall has denied that the PACs represent any wrongdoing on its part.  In a statement to PolitickerNJ, then Marketing Director Phil Angarone said Birdsall would never knowingly violate the law.

“Birdsall Services provides donations to political entities in compliance with the parameters established by the state and local government and we would not knowingly make a donation that would violate state laws or local pay-to-play ordinances,”  Angarone said a year ago.

In November, Angarone pleaded guilty for his role in the scheme to disguise illegal corporate political contributions as personal contributions of employees of the firm.  That investigation has resulted in the indictment of nine additional Birdsall employees including former CEO Howard Birdsall.

Late last week, the state Attorney General froze the firm’s assets, forcing Birdsall to file for bankruptcy.  Birdsall contested the AG’s action and won the release of $1.6 million in order to make its payroll.  Today, the AG appealed that decision. 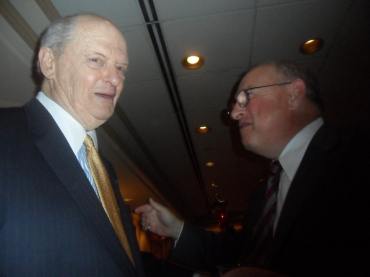