The onset of middle age used to mean that one could ease into becoming a bland old fusspot, free from the burden of remaining attuned to the microscopic upticks of the cultural barometer. You’d have bought a reliable European sedan, started making bad jokes to waitresses and receiving all your news from Time. Blissful irrelevance was the calling card.

But thanks to a confluence of factors, the generation gap that once created a comfortable buffer between youthful folly and mundane adulthood has all but eroded. Instant Internet access to the entire history of popular culture has played a role. There’s also the trend toward flat, decentralized workplaces, where those of us who watched the Nixon impeachment sit in open offices next to co-workers who were still teens when the first African-American president was elected. And not least of all is the fact that so many 40-somethings—men and women of my generation—refuse to act their age.

We now exist in a timeless culture. As media theorist Douglas Rushkoff argues in his new book, Present Shock, there is no past or future—only right now. “The present isn’t so much a culture of its own as it is an amalgamation of all the periods we’ve been through,” said Mr. Rushkoff. “And this makes it difficult to belong to a particular generation.”

The old generational identities that once defined us have broken down, and the net result is a messy temporal mashup in which 40-somethings act like skateboarders, 20-somethings dress like the grandfather from My Three Sons, tweens attend rock concerts with their parents and toddlers are exposed to the ethos of hardcore punk.

“I worked at Limbo cafe on Avenue A in the early ’90s, where The Paris Review would do readings for the drag queens, squatters and smackheads,” recalled Michael Rovner, a 42-year-old former magazine editor who is now a principal in the content marketing agency Mr. Finn Content Works. “These 45-year-old swells from the Upper East Side would show up, and it always seemed like they were crashing our party. But now I’m in my 40s and younger people don’t look at me that way. I can go see Sky Ferreira at Glasslands, though I suppose I do run the risk of being called ‘sir.’”

The lines are blurred, the edge has been dulled and the traditional time lines have been jumbled. We all now feed from the same cultural trough. And while the Baby Boomers are busy preparing their sloops for that sunset sail into retirement (provided their 401ks haven’t taken on too much ), the graying of Gen X has been postponed indefinitely.

While the erosion of the generation gap may seem like a positive step for society—longhairs trusting people over 30, Archie Bunker making peace with Meathead—the liberation provided by this breakdown is largely symbolic. As Mr. Rushkoff put it, “Culturally, everything is just one level deep, one search away.”

“There are no longer the same generational divides, but I think that’s also because no one is experiencing much of anything in depth,” he continued.

Which is not necessarily a condemnation of our 140-character society, or the technology that wrought it. The Internet has unlocked the creative potential of humanity, and it is making people more accountable for their actions. But for me and many of my generational cohorts, this interconnectedness has also resulted in a lot of extra homework, as we’re now expected to keep up with every new ripple in the sea of culture.

You may know, for instance, that Skrillex is the EDM dude with the weird haircut that all the suicide girl baristas had last summer—a trend that, of course, has spawned at least one Tumblr. I didn’t. So I had to do a little studying, in order to communicate intelligently with my younger co-workers.

It may sound trivial, but maintaining all this awareness is tiring business. Though I feel neither old nor outmoded, I just turned 45. Assuming I manage to walk the Earth for as long as my recently deceased father did, the first half of my life is over. By even the most generous definition, I am middle-aged. As such, I tire easily.

And I’m not alone.

“It’s gotten exhausting,” said Kyle Smith, the 46-year-old author and New York Post film critic. “I have to keep up in some ways, otherwise my cultural references risk sounding like Grampa Simpson’s. But I’m also supposed to stay on top of reality TV, Homeland, everything on HBO, the latest politician’s gaffe and whatever’s trending on BuzzFeed, Vine and Twitter? I can’t do it. There aren’t enough hours in the day. And I just don’t have the desire.” 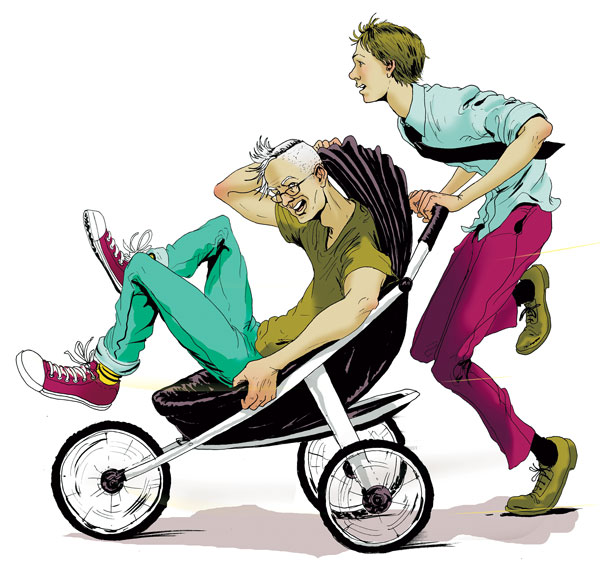