“You look the same,” said Bathgate, who said he believes he taught Buono, the presumptive Democratic nominee for governor, American Government.

The school, though, didn’t look the way it does when Buono went here in the early 1970s.

“It’s changed,” she said, standing amid the campus finery.

Bathgate was part of the backdrop of American Federation of Teachers (AFT) New Jersey who cheered and whooped it up for Buono as they formally gave her their endorsement.

Savoring their support, Buono pounced on her opponent, Republican Gov. Chris Christie’s remarks last week that unions, not teachers, are the problem with public education.

“Unions aren’t the problem,” Buono said, addressing the governor. “Your misplaced priorities are the problem.”

Buono’s beef in part is that Christie sliced $180 million out of the 2011 state budget. He later made restorations, but higher education is still five percent below where it was when the governor assumed office.

Burnishing a 92% labor record, Italian immigrant’s daughter Buono said, “I stand up for the teachers and the students. Education is the great equalizer. I am proud to stand with the AFT.”

The Christie campaign wanted to know how Buono could bask in the support of the AFT when the organization’s leadership supported Christie’s implementation of merit pay for Newark’s public school teachers.

“Barbara Buono is more than happy to stand up to collect union endorsements, but when it comes to actually supporting real proposals to reward our very best teachers with merit pay, she’s nowhere to be found,” said Kevin Roberts, spokesman for the governor. “How does she explain her direct opposition to the groundbreaking contract agreement between Governor Christie and AFT that provides merit pay for Newark’s best educators?” 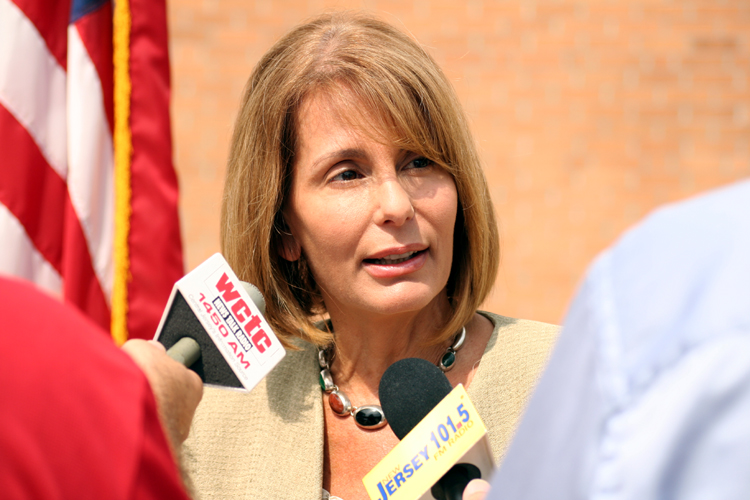