Poor G train. Nobody loves it. It’s short, it’s unreliable, it has poor personal hygiene. It lives in a bad area. It doesn’t have as much money as those big fancy Manhattan trains. It rarely gets to mingle with other trains, save for a few illicit southern rendezvous with the F train.

And now it’s getting blamed for ruining riders’ relationships.

According to a piece by Meredith Hoffman of DNAinfo, the G train’s unreliable service and limited route is negatively impacting Brooklynites’ dating lives.

“I had to make a rule that was, literally, if you live off the G you’re not for me,” said one Bed-Stuy resident, Mutale Nkonde, who lives near the A and C trains. “To get to the G is such a monumental hike, it’s two buses plus a long walk.”

The piece quotes a number of Brooklynites who have ended relationships due to the G train commute, or have even sworn off G Train dating altogether.

Add to this a bit of a sketchy aesthetic, and the G train hardly puts riders in the mood for consensual lovin’.

“When you get there [to the Myrtle-Willoughby station] it looks Law and Order-ish. It looks like a crime scene,” added Ms. Nkonde.

An MTA spokesperson allegedly declined to comment, presumably because the MTA has better things to do than speculate wildly on their riders’ dating lives. Like, oh, I don’t know, FIX THE GODDAMN G-TRAIN!?

Clinton Hill resident Alex Saba takes the G to visit her boyfriend who lives in Greenpoint, but told DNAinfo that the train has impeded the possibility of “casual get-togethers.”

If you were doubting that the testimonies of a couple of random Brooklynites points to a larger dating trend, then doubt no more: there are even viral videos (2,466 views!) to support the cause. Specifically, a YouTube video Called “The Brooklyn Date,” created by Tyler Fischer, depicts a couple’s magical date reaching a bitter end when the woman asks the man back to her G train apartment.

For now, Brooklynites, if you’re looking for your Sliding Doors romance, stick to the L train. 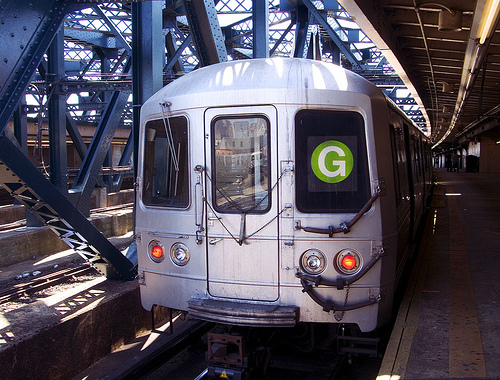