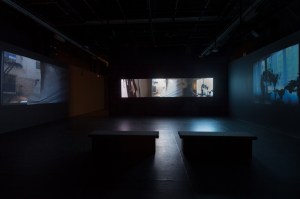 Chantal Akerman’s new three-channel video installation Maniac Shadows is a kaleidoscopic complication of double bluffs and autobiographical preoccupations that hides the artist’s frank, freighted, childishly brazen and innocent gaze in plain sight. But as with Edgar Allan Poe’s purloined letter, you need more than plain sight to catch it. Begin at the middle screen, in the narrow foyer of a New York apartment—like all of Ms. Akerman’s hallways, this one is a toss-up between birth canal and abattoir chute—with the artist herself, ignoring the camera as she gathers up empty electronics packaging into plastic C-Town and B&H Photo bags. On the right screen, a looming toilet behind a brown wicker hamper is the deeply submerged comic impulse, itself nothing but the attempt to encapsulate death. On the left plays a fuzzed-out snippet of President Obama’s election night party, filmed playing on a television screen, with a single hand-held waver to belie the camera’s cold steadiness. Surrounded by fallen balloons and high emotion, the president shakes one hand while looking for the next, his moments of encounter, however genuine, lost in the overriding need for escape.

Ms. Akerman shows us window bars, air shafts, twisted paper window shades, empty living rooms, her mother in a kitchen, herself sitting on the floor behind her bed, and her own shadow posed with a friend’s on rosy sand or else alone and sinking into a sucking brown tide. Our presence in the world is impossible to deny, but its only effect is to make what we’re looking at darker. And however long we’re allowed to linger in suggestion, the culmination is always snatched away—as soon as we notice food on the table in that shot of her mother in the kitchen, it’s gone.

But this fear of intimacy, this perpetually unfulfilled yearning, this constant awareness of death, this whole apparatus of personal experience and memory—it’s all just a part of the bluff. Right next to the scenes of her own interiors, as close and as foreign as a stranger on the subway, Ms. Akerman puts a series of noisy uptown street scenes: little boys with backpacks and basketballs protected by a blue wooden police barricade, a fire engine rushing past, a little boy in a green shirt gleefully shouting as he rides his scooter into the nothingness at the edge of the frame, a block party, three young, heavily tattooed women in skimpy outfits. Can the meaning of their tattoos, in New York, now, have any overlap at all with the meaning a tattoo once had in Europe? On the left screen, where one man dances on the sidewalk alone, a 7-year-old girl, with all the fragile bravado and unmarked sincerity of childhood, walks past waving one arm in the air. Don’t miss it: for a moment, she looks you right in the eye. (Through May 11, 2013)