Christine Quinn’s mayoral campaign scheduling arrives with a caveat that her rivals rarely, if ever, employ: “NOT FOR PRINT OR BROADCAST” and “ALL ITEMS EMBARGOED UNTIL DATE AND TIME OF EVENT.”

Beginning with her bid’s launch last month, the Quinn campaign has told reporters they cannot reveal Ms. Quinn’s whereabouts until the event she is attending is underway. In contrast, all but one of Ms. Quinn’s competitors have no stipulations whatsoever, oftentimes simply stating “Media Advisory” or “For Immediate Release.” Only Public Advocate Bill de Blasio’s campaign says, “For Planning Purposes Only,” but there is no specific order to avoid publishing the details.

“It’s a template that we use on the public schedule,” he said, noting that her appearances at many public forums are reported elsewhere anyway, including yesterday’s. “In any campaign, there are times in which you embargo a news event that you plan to hold that day. But in this case, obviously this was a public event.”

“Our schedule is public, because Bill believes that when you’re asking for public trust and support you need to be accessible to the public, to answer their questions and hear their concerns,” Mr. Prince said in a statement. “Personally, I can’t understand why any candidate for Mayor would want to hide from the public, but I can’t explain the strategy of the Quinn campaign.”

Another campaign was much harsher.

“That’s a poor reflection of what kind of mayor she’d be, transparency is an important quality in a mayor,” said Todd Brogan, a spokesman for former Councilman Sal Albanese. “It doesn’t reflect well on Christine Quinn that she wants to keep the public from knowing what she’s doing.”

Some operatives speculated the schedule strategy was to help Ms. Quinn avoid the clusters of dedicated protesters that seem to shadow her at many events, something Mr. Morey said was not the case. But one leading Quinn gadfly, documentary filmmaker Donny Moss, believes otherwise.

“Of course Quinn wants to keep her schedule private. She doesn’t want to have to explain why she’s greeted by protesters day after day,” he explained. “Our presence reflects poorly on Quinn, and it begs the question among the thousands of people who pass us, ‘What has Quinn done to stir up so much anger that people have taken to the streets to protest her?'”

Mr. Moss added, “We’ve watched her and her entourage navigate around piles of garbage to avoid passing by us.” 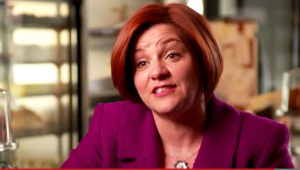