The leadership of the New Jersey Regional Council of Carpenters has decided not to support Gov. Chris Christie’s re-election based on what leadership cites as a difference of values.

The building trades organization on Friday sent a letter to Christie noting its displeasure with the governor’s veto last week of a project labor agreement (PLA) bill (Senate Bill 2425) authored by Senate President Steve Sweeney (D-3). Aimed at union labor in the aftermath of Hurricane Sandy, Sweeney’s bill would have expanded the terms and conditions of PLAs in the case of key infrastructure, including roads and bridges. In vetoing the bill, Christie said he worried about its impact on public contracting.

“By vetoing this bill, Gov. Christie is setting the stage for out of area contractors who low-ball their bids while planning to pay less than legally required wages, taxes, and insurance to exploit the need for expediency,” Michael Capelli, the carpenters’ executive secretary, wrote in a letter to members. “This veto is also denying municipalities the ability to set conditions on their own contracts for issues which include security screening, drug testing, apprenticeship programs, and veteran hiring programs. These provisions are especially important in preventing predatory contractors who exploit federal and state funds when communities are at their most vulnerable. The Governor’s veto is a disappointment that signals his ignorance of what we stand for.”

A source close to the process said the governor would have to do something “earth-shattering” to reverse himself and land the support of the carpenters, an 18,000-strong organization statewide.

“We support PLAs because they play a critical part in leveling the playing field for legitimate contractors to compete for work on equal terms and they ensure hiring happens at the local level, keeping valuable skills and income in our communities,” Capelli wrote. “The Governor’s veto is a disappointment because it sends a clear message to Union Carpenters that he does not support our core values.”

Christie’s allies argue that the building trade leadership’s’ mere consideration of backing a GOP governor shows the extent to which Christie has Democrats on defense.

A source said the group ordinarily officially endorses for governor in the fall, but along with other building trades had felt pressure from a popular governor to endorse earlier than usual.

Following the Laborers’ endorsement of the GOP governor late last year and Christie’s successful town hall at an irownworkers’ union hall in Perth Amboy, many expected the governor to land more union support from the building trades.

He did, including that of the Operating Engineers Local 825 and the plumbers and pipefitters.

But the source told PolitickerNJ.com the governor’s rejection of Sweeney’s PLA bill changed the game for the carpenters. 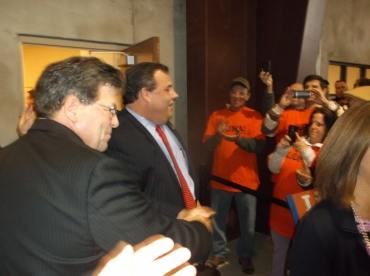