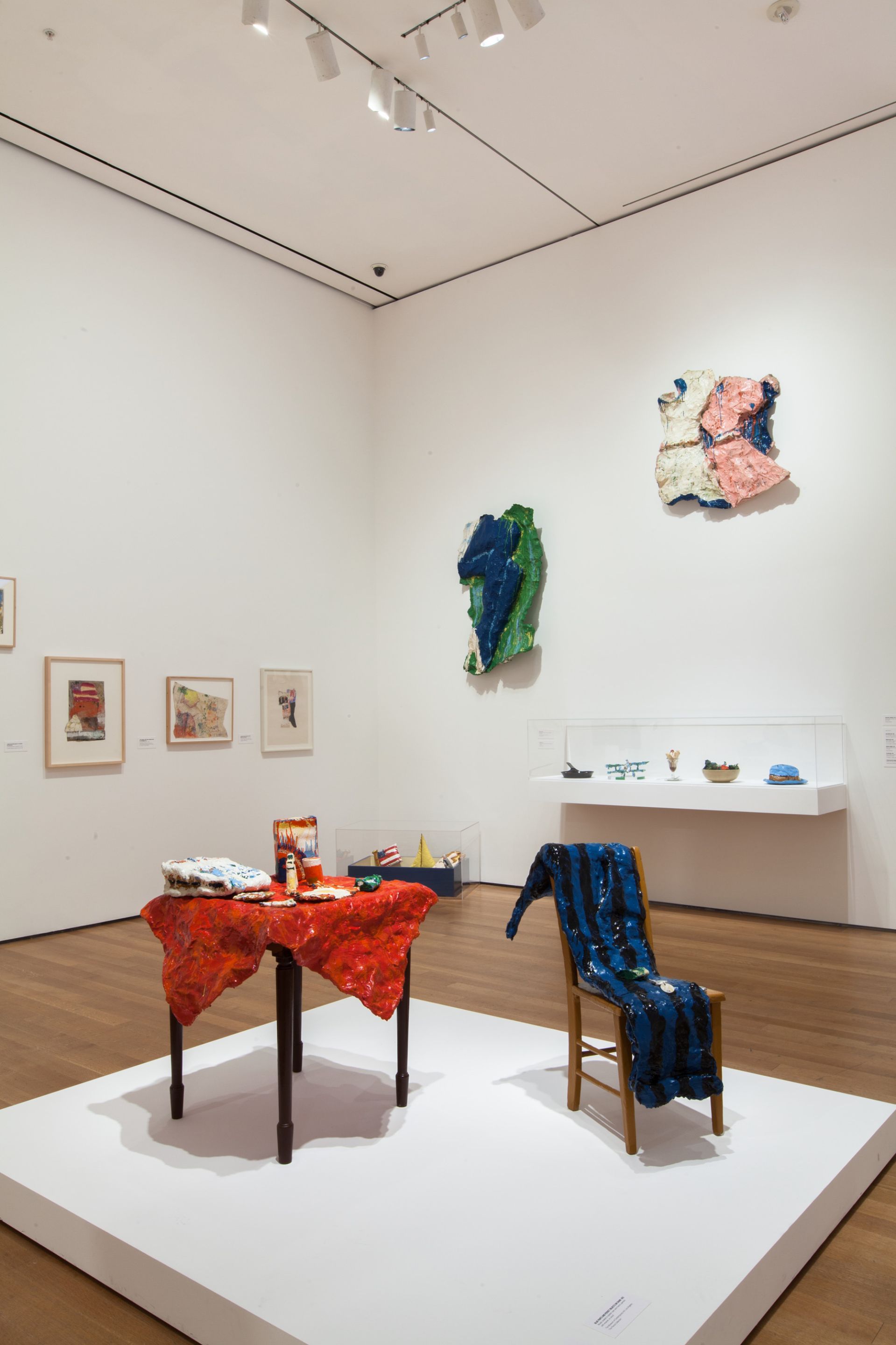 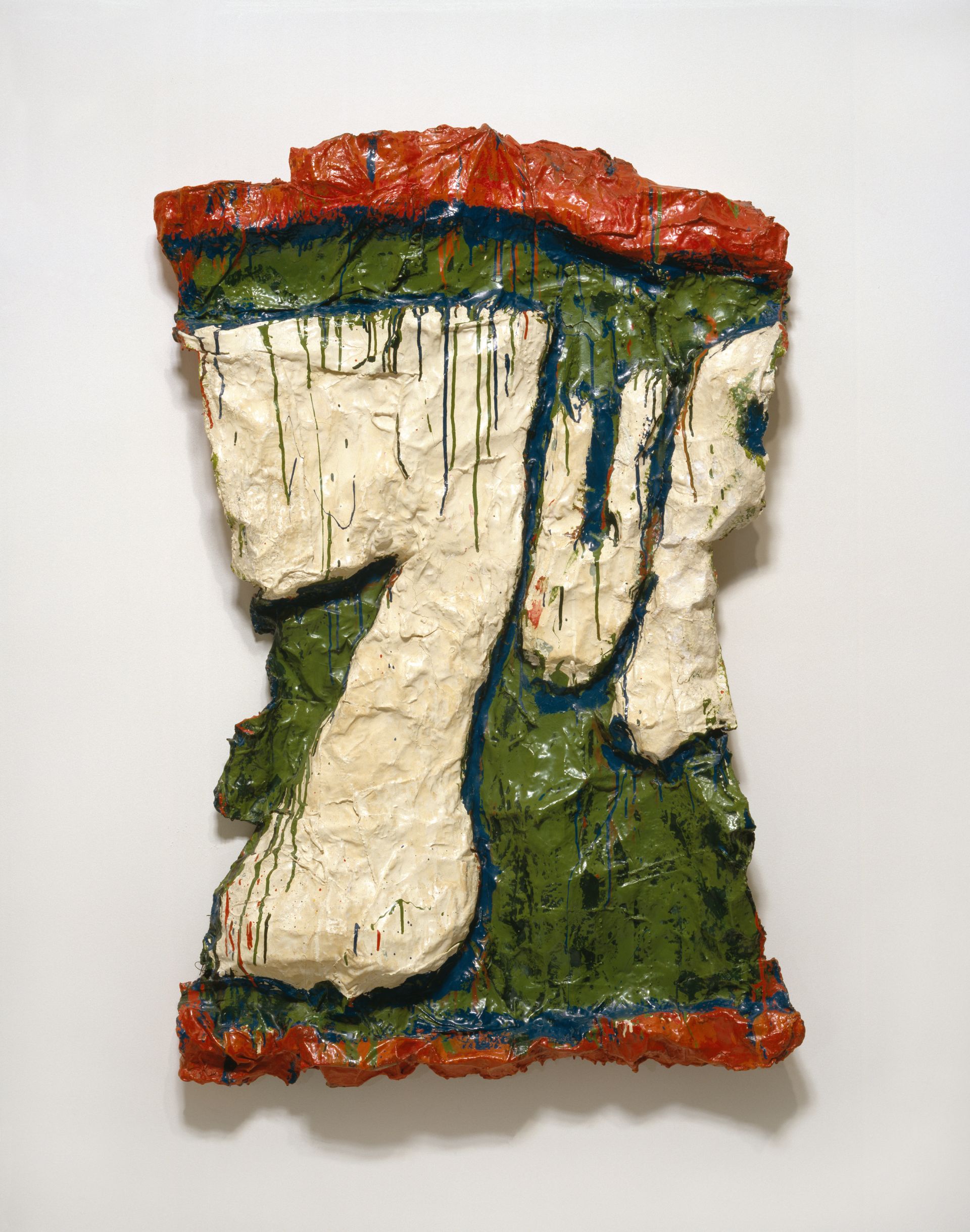 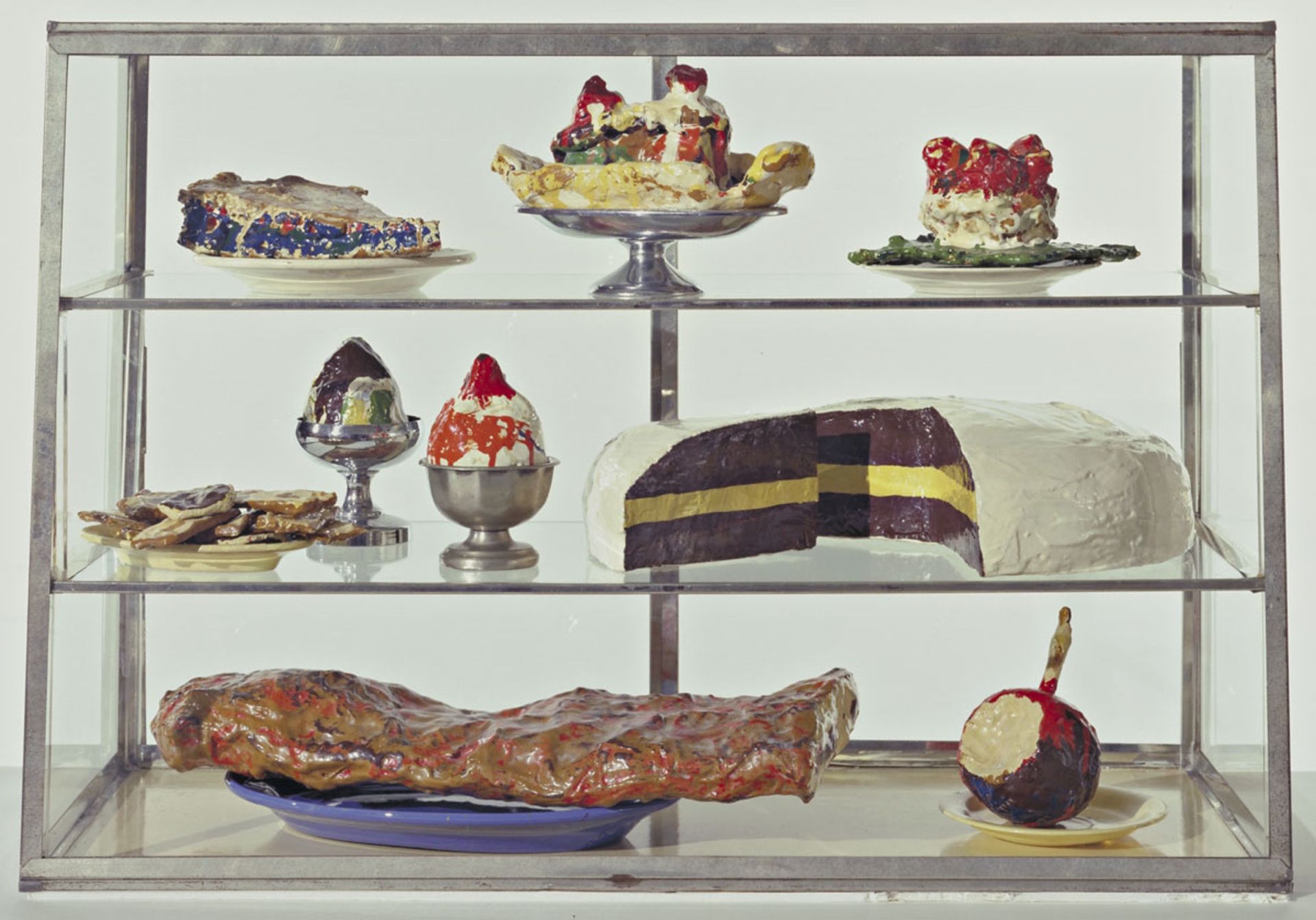 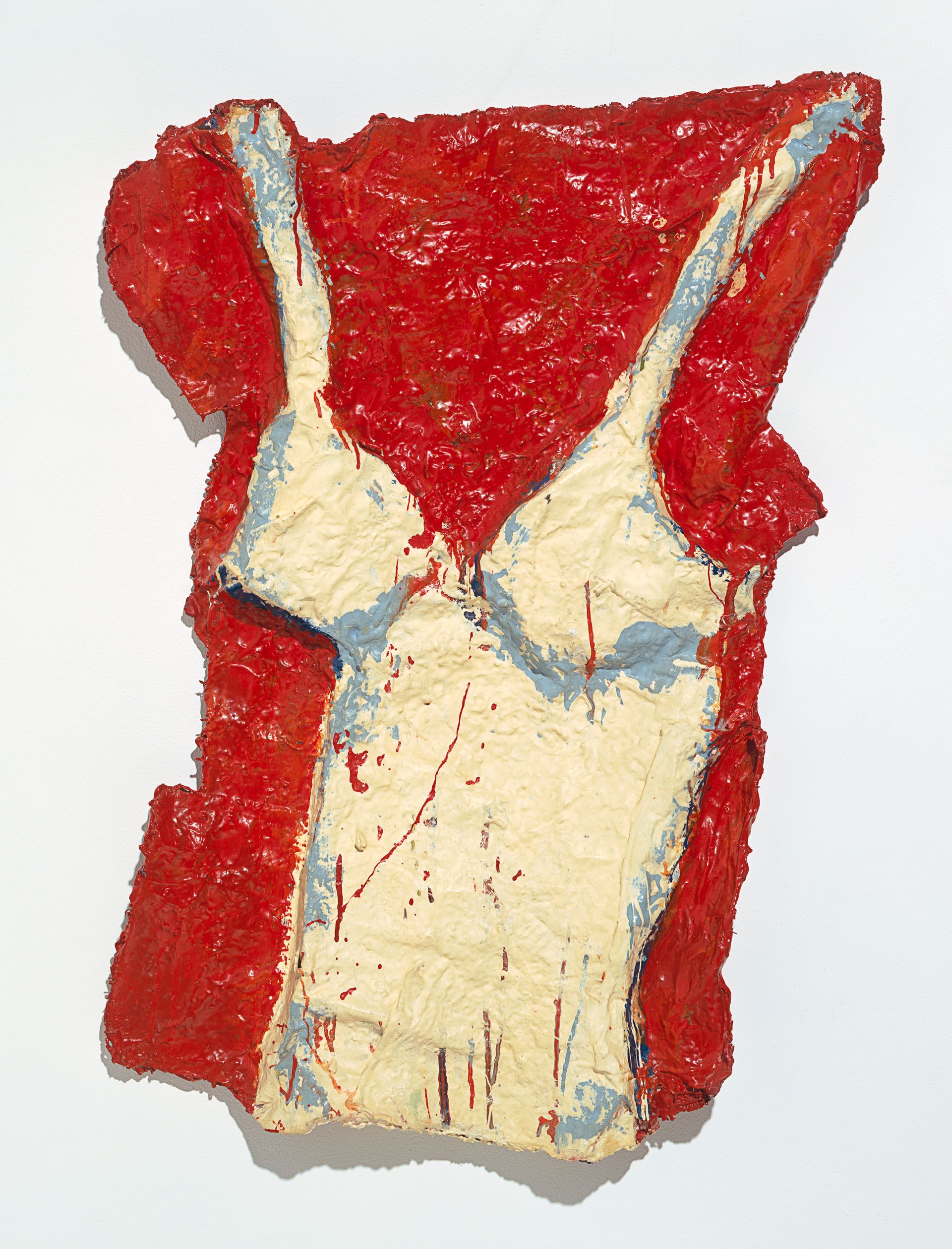 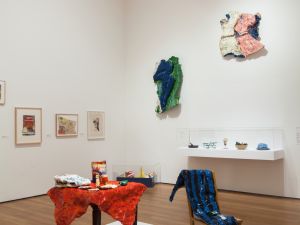 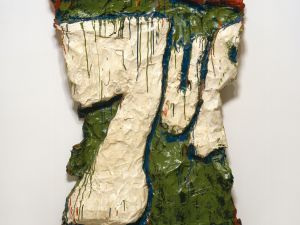 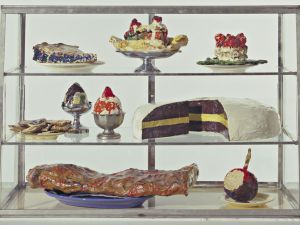 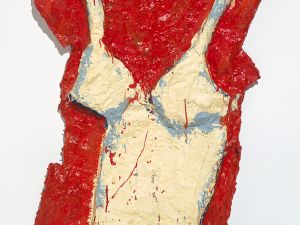 One tends to associate Claes Oldenburg with large public art sculptures: flaccid sausages, comical bicycles and tumescent lipstick tubes stuck into the landscape. But it’s the tiny and the provisional that stand out in the four projects currently on display at MoMA in the largest-ever presentation of his early work, an excerpt from a traveling Oldenburg survey. Little pieces like Fried Egg in Pan (1961) and Tartines (1964) show off a pleasing equivalence of paint and materiality. The plaster “egg” fills the pan. There are “real” glass display cases filled with pies made of burlap soaked in plaster and painted in brightly colored enamel (Assorted Pies in a Case, 1962), which presage both Wayne Thiebaud and, later, Gina Beavers.

Back in 1961, such items were for sale in The Store, which is what Mr. Oldenburg called his cheap East Village studio when he kept it open to the public for a month. It was an experiment in the relationship between fiction and fact. You could trade money for art—for sale were, as he put it, “Ham art, pork art, chicken art, tomato art, banana art, apple art, turkey art, cake art.” There were plaster men’s shirts, plaster women’s underwear. There was even a sculpture representing a crude cash register. Mr. Oldenburg staged performances and drew there. It was the beginning of American Pop Art.

There’s a simmering sexuality to Mr. Oldenburg’s art. His early drawings, on display at MoMA, show men, clearly aroused, chatting with long-legged, big-assed “street chicks.” Even his crude sculptures of cardboard and casein vibrate with a tactile aesthetic located miles from the antiseptic Pop of Warhol. Mr. Oldenburg’s Pop Art is flaccid and blobby, not pretty. It’s messy stuff permeated by the street. A dozen drippy sculptures, many featuring commercial logos, are hung salon-style on one wall. His oversized floor sculptures of grotesque comestibles like giant hamburgers, slices of cake and ice cream cones were sewn by his then-wife, the artist Patty Mucha. They look dirty.

With the Mouse Museum (1972-77), the curators of the MoMA show—Achim Hochdörfer of the Museum Moderner Kunst Stiftung Ludwig, Vienna, along with MoMA curator Ann Temkin and assistant curator Paulina Pobocha—put on display the accumulation of found objects that Mr. Oldenburg first exhibited in Kassel in 1972. In a structure shaped like the head of a cartoon mouse, there’s an egalitarian mix of about 400 tiny found objects. There are lightbulbs and junk-store paintings—one still labeled $1.29. There are used tea bags, plastic tempura shrimp, a two-headed dildo, a giant toothbrush. There are Japanese ice cream displays, chocolate bonbons, dog chew toys, walnuts filled with wax, a plastic geranium and many more treasures, all tastefully backlit and set in glass vitrines. Accompanying the display is a soundtrack of rubber toys being washed.

Mr. Oldenburg was ever on the lookout for resonant objects: “Every sidewalk is a Ray Gun Beach,” he said of his process of collecting the hundreds of things in the shape of guns on display in the Ray Gun Wing, adjacent to the Mouse Museum. In the tradition of Kurt Schwitters, Mr. Oldenburg is an artist whose materials came more from the street than the art supply store. A wall of his great found wooden “flag” sculptures, from the 1960s, show the messy, gritty, scavenging work that’s part formal study, part documentary snapshot of New York. (Today, Yuji Agematsu continues such work with poetic collections of wispy urban detritus.)

But the significance is not just that the everyday has become art. With Mr. Oldenburg, the very framing techniques used to connote high art became mobile, detached from art objects. They fell into new, rich, nuanced contexts. This model, full of potential, made a theatrical space of the street: anyone could be an artist, any space a gallery, any bit of trash art. It is the absurdity and not the seriousness of the structure—the mimicry of the fictions of the gallery and the museum and how they play with capitalism and art—that makes these forms unique and interesting. Mr. Oldenburg’s Street and his Store, his Mouse Museum and its Ray Gun Wing play with the ways in which art is exhibited. They are the progenitors of some of the most interesting projects in New York today. (Through August 5, 2013)

Update, May 1: An earlier version of this article misidentified Mr. Oldenburg’s wife.